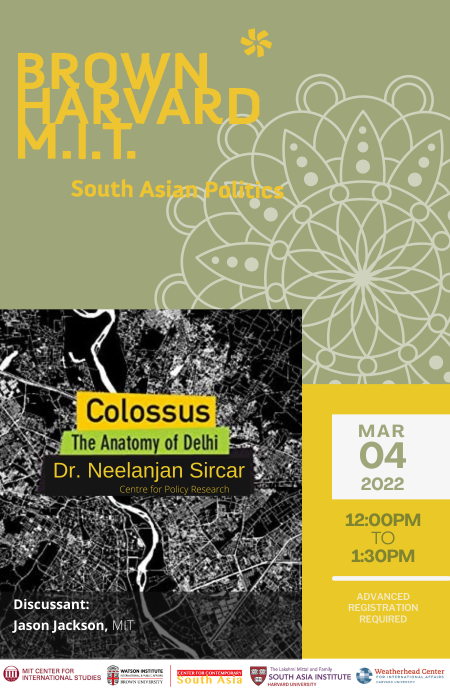 Dr. Neelanjan Sircar is a Senior Visiting Fellow at CPR and Assistant Professor at Ashoka University. His research interests include Indian political economy and comparative political behavior with an eye to Bayesian statistics, causal inference, social network analysis, and game theory. Mr Sircar’s recent work focused on state level elections in India through both data work and ethnographic methods. He is particularly interested in understanding theoretic principles that undergird the decision-making processes of voters in India, which can shed light on democratic practice in the developing world more generally. He also works on projects characterising the social connections between citizens in India and their local brokers and leaders, as well as how these local brokers and leaders, both rural and urban, make decisions.

About the Book:
The National Capital Region of Delhi is a diverse and unequal space. Its more than 30 million people are sharply differentiated by economic class, religion and caste, education, language, and migration status. Its 45,000 square kilometres is a tapestry of spaces - ghettoes, slums, enclaves, institutional areas, planned and unplanned and authorized and unauthorized colonies, forests and agricultural fields. In some ways it is a dynamic society aspiring to global city grandeur; in other ways it is a bastion of tradition, sectarianism and hierarchy. Colossus details these realities and paradoxes under three themes: social change, community and state, and inequality. From the material condition of the metropolis - its housing, services, crime and pollution - to its social organization - of who marries whom, who eats with whom, and who votes for whom - this book unpacks the complex reality of a metropolitan region that is emblematic of India's aspirations and contradictions.