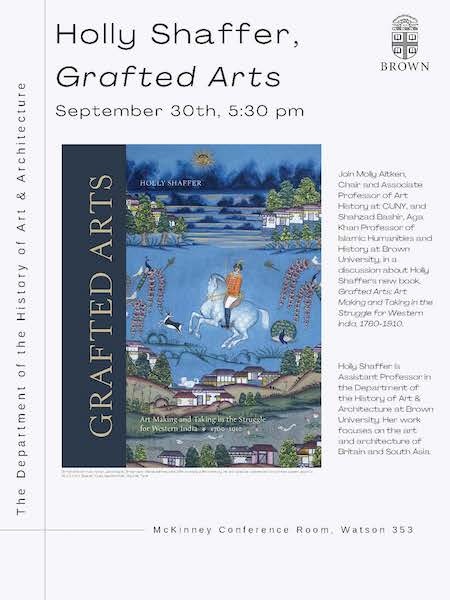 Join the Department of the History of Art & Architecture for a discussion of Professor Holly Shaffer's new book, "Grafted Arts: Art Making and Taking in the Struggle for Western India, 1760-1910" (Yale University Press 2022).

About the Book:
Conceptualizes “graft”— the violent and creative processes of suturing arts as a method of empire building in western eighteenth-century India

Grafted Arts focuses on Maratha military rulers and British East India Company officials who used the arts to engage in diplomacy, wage war, compete for prestige, and generate devotion as they allied with (or fought against) each other to control western India in the eighteenth century. This book conceptualizes the artistic combinations that resulted as ones of “graft”—a term that acknowledges the violent and creative processes of suturing arts, and losing and gaining goods, as well as the shifting dynamics among agents who assembled such materials.

By tracing grafted arts from multiple perspectives—Maratha and British, artist and patron, soldier and collector—this book charts the methods of empire-building that recast artistic production and collection in western India and from there across India and in Britain. This mercenary method of artistry propagated mixed, fractured, and plundered arts. Indeed, these “grafted arts”—disseminated across India and Britain over the nineteenth century to aid in consolidating empire or revolting against it entirely—remain instigators of nationalist agitation today.

Sponsored by the Department of History of Art & Architecture