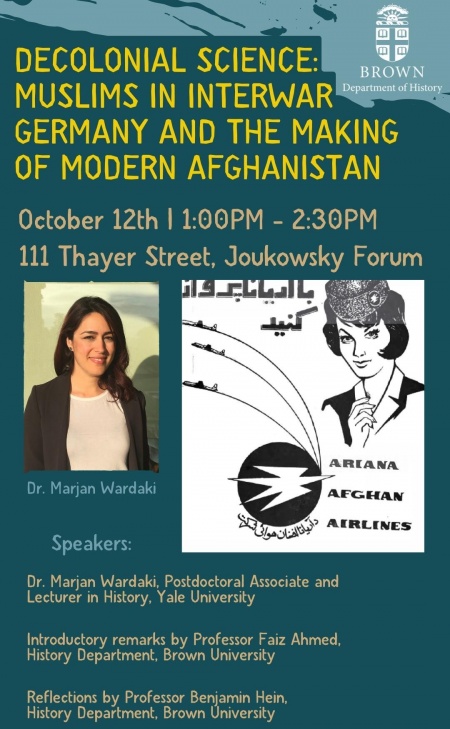 Marjan Wardaki is an intellectual historian of modern Middle East and South Asia, with research interests in the history of science and medicine, and the history of migration.

This talk is based on research for an ongoing book project, which proposes Afghanistan as a new site to study the history of science and colonialism, specifically through its encounters with not merely direct forms of colonial encounters (i.e., British Raj), but also indirect forms of imperial pursuits as seen through the technological and industrial expansion of Weimar Germany in early twentieth century Afghanistan.

The book examines lives, movements, objects, and ideas as these circulated between colonial and postcolonial sites. Professor Wardaki argues that the creation of a sovereign Islamic state in Afghanistan was a global project initially organized in the German diaspora and highly dependent on both the diasporic collaboration with other Muslims and the harnessing of science and technology for its new postcolonial industries.

This history is key to understanding new forms of postcolonial regimes and the role of South Asian categories of knowledge in developing modern scientific institutions. The chapters provide insight into different models of autochthonous Muslim experiments with science and statecraft, as they drew on wide migrant networks in Germany to mobilize politically and intellectually in an era of the Empire’s twilight.

Co-sponsored by the History Department, Center for Middle East Studies, and the Program in Science, Technology, and Society.