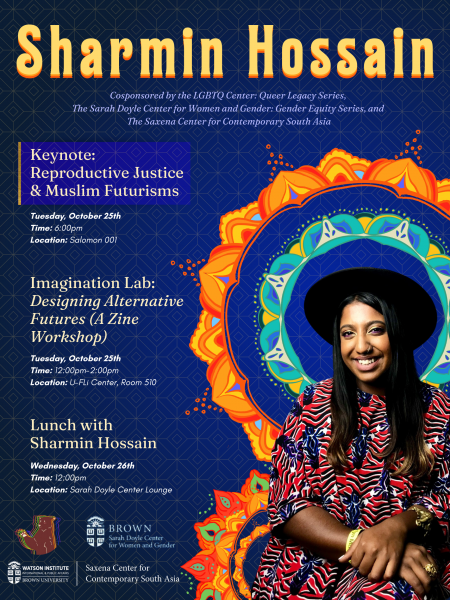 Queer Muslim organizer and emergent strategist Sharmin Hossain will delve into the framework of reproductive justice through an Islamic liberation theology lens and embrace the principle that all political organizing is an act of science fiction and creating new worlds. By looking at the intersections of attacks on reproductive autonomy and global democracy, the audience will be invited to engage in a deep discussion around abolitionist campaigns and continued struggles for a world free from oppression.

Sharmin Hossain (she/her) is a Bangladeshi-American queer Muslim project manager, political consultant, design strategist and artist, from Queens, New York. She is currently wrapping up her role as the Campaign Director of the Liberate Abortion Campaign, where she crafted a bold, new vision for abortion justice through the coalition of more than 150 reproductive justice and rights organizations, groups, and abortion providers working in coalition to fight for abortion that is available, affordable, accessible, and stigma-free for anyone who needs it. She will be joining 18 Million Rising as their Organizing Director this Fall.

There will be also be an imagination lab held on October 25th and a lunch with Sharmain on October 26th, details below.

Participants will collectively imagine, envision and co-create just and beautiful futures that presume love, care and community and that catalyze systems based on regeneration, resilience and interdependence. Lunch will be served.

Sharmin and a facilitator will engage participants in a conversation around the work Sharmin does, gender, sexuality, and their identity. This event will be open to students and food will be provided. This will be an opportunity to further explore themes from her zine workshop and formal talk the previous evening.