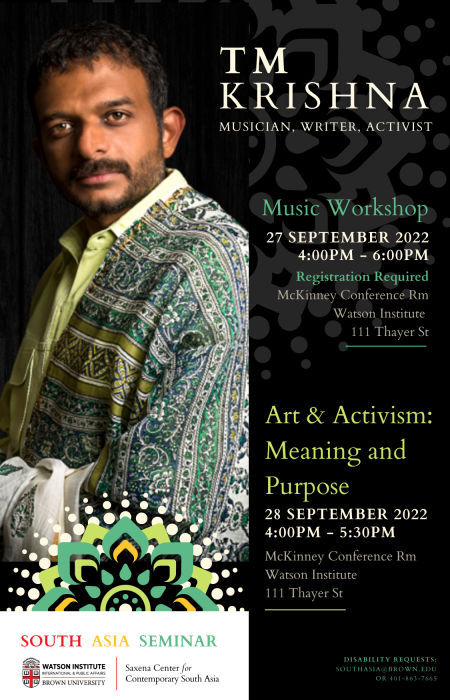 Join us for a lecture and discussion with renowned musician, writer and activist TM Krishna. TM Krishna will also offer a music focused workshop for musicians at Brown on September 27th (more details).

About TM Krishna
The pursuit of a rigorous and multivalent art form like Karnatik music presents many intersections for a contemporary practitioner. In his primary identity as a Karnatik musician TM Krishna has had a brilliant and early start since the early 90s, going on to add more dimensions and ingenuity to his musicianship while simultaneously broadening his artistic concerns with every passing year.

He is the driving force behind the Chennai Kalai Theru Vizha (formerly Urur Olcott Kuppam Vizha) and Svanubhava festival. In 2016, Krishna received the prestigious Ramon Magsaysay Award in recognition of ‘his forceful commitment as artist and advocate to art’s power to heal India’s deep social divisions’. He is also a recipient of  the award Isai Perarignar (2017) from Tamil Isai Sangam. In 2017 he received the Indira Gandhi Award for National Integration Award for his services in promoting and preserving national integration in the country. In 2019, he received the Swathi Sangeetha Puraskaram the highest honour for musicians, instituted by the Kerala State Government.