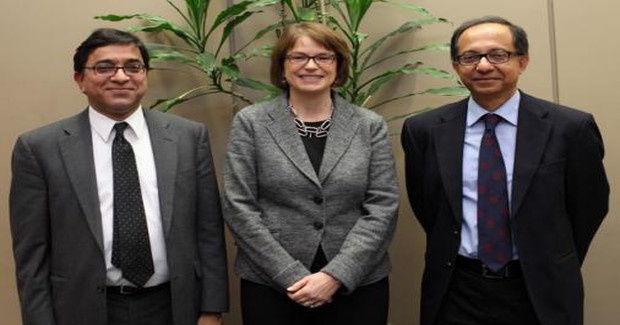 *This lecture is a two part series by Dr. Basu on Indian economic reforms. The first lecture will be on November 9th and the second on November 16th.

Kaushik Basu, was recently appointed as Chief economist of the World Bank and is the former Chief Economic Adviser, Ministry of Finance, Government of India. He is on leave from Cornell University where he is Professor of Economics and the C. Marks Professor of International Studies. Till 2009 he was Chairman of the Department of Economics and during 2006-9 he was Director of the Center for Analytic Economics at Cornell.

He is currently (the fourth) President of the Human Development and Capabilities Association, which was founded by Amartya Sen. He has held advisory posts with the ILO, the World Bank, the Reserve Bank of India and was, for several years, member of the steering committee of the Expert Group of Development Issues set up by the Swedish Government. He is currently a member of the Board of Directors of the Exim Bank of India.

He is Editor of Social Choice and Welfare, and served or serves on the Editorial Boards of the Journal of Economic Perspectives, Journal of Development Economics, World Bank Economic Review and the Japanese Economic Review.

A Fellow of the Econometric Society, Kaushik Basu has published widely in the areas of Development Economics, Industrial Organization, Game Theory and Welfare Economics. His books include Analytical Development Economics (1997, MIT Press), Prelude to Political Economy: A Study of the Social and Political Foundations of Economics (2000, Oxford University Press) and Of People, Of Places: Sketches from an Economist’s Notebook (1994, Oxford University Press). His latest book, Beyond the Invisible Hand: Groundwork for a New Economics is to be published shortly by Princeton University Press and Penguin.

Professor Basu has also contributed popular articles to magazines and newspapers, such as The New York Times, Scientific American, India Today and Business Standard. He also wrote a regular column for BBC News Online. He has appeared on various television programs including CNN (USA), NDTV and CNBC (India) and BBC.

In May 2008 he was awarded one of India’s highest civilian awards, the Padma Bhushan, by the President of India.