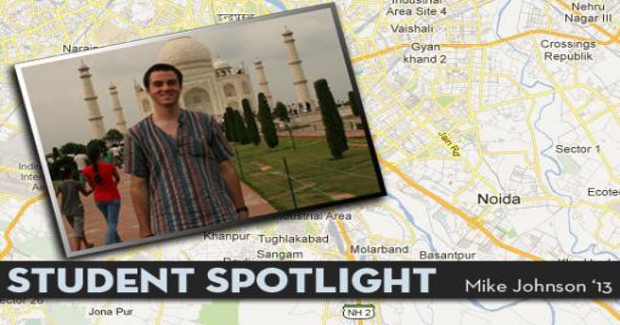 Mike Johnson '13 is a Development Studies concentrator who focuses on civil society, urbanization, and social movements. Mike is writing his senior thesis on land acquisition in Noida, for which he traveled to India last summer on a Royce Fellowship to conduct on-site research. Two weeks ago, Mike presented his work along with two other Royce Fellows at the Watson Institute. Brown-India Initiative spoke with Mike to learn more about his senior thesis as well as his focus on contemporary India in his undergraduate studies.

Brown-India Initiative: What is the focus of your research? How did you come to this topic?
Mike Johnson: My research focuses on land acquisition in India with respect to how the displaced contest the terms of the land dispossession process and what effects that is having on inclusive development.  This topic was inspired by the phenomenon of modernity and economic growth marginalizing the countryside and rendering its population structurally irrelevant.  To me, this made the countryside seem passive in the growth and industrialization process and I wanted to know how they were actively trying to shape the process.  The issue of land acquisition is highly contentious in India and captures this dynamic very accurately.

BII: What was your on-site research process like?
MJ: I chose a case of land acquisition on the outskirts of Delhi, in an area called NOIDA Extension.  Farmers and the State development authority had been embroiled in litigation over the way in which the land was acquired.  Conflict over the acquisition process in NOIDA Extension has been going on for over six years and has generated high costs for the builders in the area, as well as the landowners who are refusing to give up their land.  I collected interviews from all of the major stakeholders in the acquisition process, including lawyers, farmers, village-heads, government officials, activists and builders.  I also coded the High Court and Supreme Court judgments that are relevant to this case.  My analysis of the narrative of conflict in NOIDA Extension is guided by social movement theory, specifically the study of contentious forms of political engagement.

BII: Can you share with us some of your results?
MJ: The case I studied was interesting because the project-affected population was able to garner a significant amount of traction in courts with their claims against the way the state acquired land.  The discourse of judges in the rulings on the land acquisition process in NOIDA Extension and surrounding areas closely matched the rhetoric of activists in the region who were advocating for a more inclusive approach to displacement.

BII: Beyond your thesis, how has contemporary India been a focus of your undergrad studies?
MJ: Studying and engaging with India has probably been one of the most defining experiences of my undergrad years.  During my sophomore year, I became really fascinated with India’s democracy.  It seemed to contain every development challenge at every level of intensity.  I have taken several classes at Brown to understand the political, economic and social climate in contemporary India with professors like Ashutosh Varshney and Vazira Zamindar.  I have also studied the Hindi language, which is proving to be an elusive skill for me these days.  The summer after my sophomore year, I interned for a supply-chain management and logistics company in Mumbai, which inspired me to apply for funding to return the following summer to conduct research for my senior thesis.