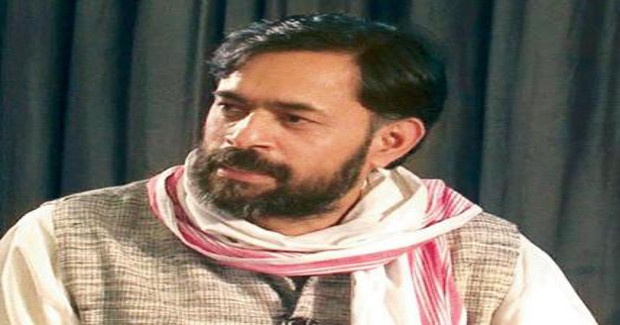 The Brown-India Initiative Spring 2013 Seminar Series presents Yogendra Yadav, Senior Fellow at the Centre for the Study of Developing Societies and the Spring 2013 Meera and Vikram Gandhi Fellow in Residence. Yadav will deliver a lecture titled, "The Idea of Equality in 20th Century India."

From 1996-2009 Yadav was involved in designing and coordinating the National Election Studies, the most comprehensive series of academic surveys of the Indian electorate. Since 1996 Professor Yadav has been a political analyst and commentator on more than 200 televesion programs related to pre-election assessment and has appeared on live programs at the time of the counting of election results. These programs have appeared on a number of television channels in India including Doordarshan National Network, NDTV and CNN-IBN. Yadav is on the International Advisory Board of the European Journal of Political Research.

Yadav has published dozens of academic papers in various books and journals and has written over two hundred articles in newspapers and magazines. He is co-author of State of Democracy in South Asia (Oxford University Press, 2008) and Crafting State Nations: India and other Multinational Democracies (Johns Hopkins University Press, 2011).
Yadav received his BA from SGN Khalsa College, an affiliate of the University of Rajasthan. Yadav holds an MA in Political Science from Jawarharlal Nehru University in New Delhi, and an M. Phil in Political Science from Panjab University, Chandigarh. Before joining the CSDS, Yadav was a professor in the Department of Political Science at Panjab University, Chandigarh.

He is Founder Convenor (1995-2000) and current member of the Lokniti network, an all-India collective of scholars of Indian politics. He was Founder Director (1997-2003) and later Co-Director (2003-2009) of Lokniti: Institute of Comparative Demoracy, a research program of the CSDS. He is currently a member of the Governing Council of the Indian Council of Social Science Research and a member of the Governing Board of the Indian Institute of Advanced Study, Shimla. He is an Honorary Fellow, Indian Institute of Political Economy, Pune (since 2004). From 2005-2012 Yadav was one of the two Chief Advisors in Political Science for the National Council of Educational Research and Training (NCERT) who supervised the writing of the new textbooks for Political Science for class IX, X, XI and XII. In 2010 Yadav was appointed to the National Advisory Council to oversee the implementation of the Right to Education act (RTE), and served as Chair of the Task Force on Research and Evaluation of RTE from 2011-2012. He was also a member of the Expert Group appointed by the Government of India in 2007 to examine the structure and functioning of an Equal Opportunity Commission.

Yadav was awarded the Malcolm Adiseshiah Award for Distinguished Contributions to Development Studies in 2008. In 2009 the International Political Science Association honored Yadav with the first Global South Award "in recognition of outstanding work on the politics of the developing world."  This event is free and open to the public.