On The Road To 2014: Election Reporting Archive with Barkha Dutt 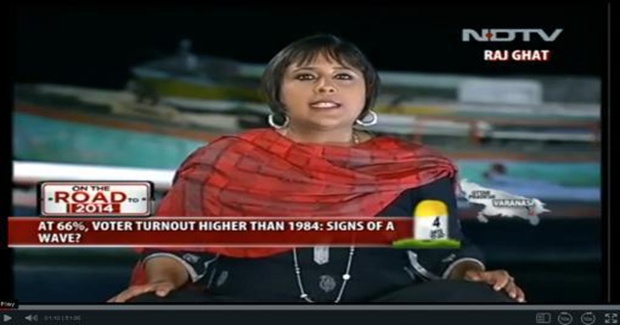 On The Road To 2014: Election Reporting Archive with Barkha Dutt

Ms. Dutt is Group Editor with NDTV, India's premiere news and current affairs network. She is one of India's best known journalists and television anchors and is also the youngest journalist to receive the ‘Padma Shri’, one of the country's highest State honours. In a career spanning sixteen years she has won over forty national and international awards for journalism including the Global Leader for Tomorrow award from the World Economic Forum, the Commonwealth Broadcasters' award for 'Journalist of the Year' and the Asian Television Award for "Best Talk Show." Just last year she was nominated alongside Sir David Attenborough and Ross Kemp for “International TV Personality of the Year’ at the AIB (Association for International Broadcasting) awards in London.

Barkha Dutt emerged as a household name with her frontline war reporting on the Kargil conflict between India and Pakistan in 1999.

Over the past decade she has reported from several conflict zones across the world, including Kashmir, Afghanistan, Pakistan and Iraq cementing her reputation as a fearless journalist who reports from some of the most dangerous places in the world. Most recently Barkha Dutt spent the early part of the year reporting on the Arab uprisings in both Egypt and Libya.

Barkha Dutt is also the host of the weekly, award-winning talk-show, "We the People'' as well as the daily prime time show, 'The Buck Stops Here. Her Sunday talk show ‘We the People’ named after the first three words of the constitution brings a 100 member studio audience face to face with the newsmakers of the week and has covered issues as diverse as politics, sexuality, gay rights and issues of national security. It is now the longest running talk show on Indian TV.

On the 'Buck Stops Here' Barkha Dutt has exclusively interviewed a range of personalities around the world and at home including Congress President Sonia Gandhi and her daughter Priyanka Gandhi; Pakistani newsmakers like Benazir Bhutto, Imran Khan, Fatima Bhutto and General Pervez Musharraf ; Authors such as Salman Rushide and Mohammed Hanif, International personalities including Hillary Clinton and His Holiness The Dalai Lama and actors such as Shahrukh Khan.

She is a nominated member of the National Integration Council of India. Several Bollywood films have been based on Barkha Dutt's work, including the critically acclaimed film 'Lakshya'. She was also recognised as an ASIA 21 Fellow by the New-York based Asia Society and now serves on it's Global Council.. She studied at St. Stephen's College, Delhi and the Journalism School at Columbia University, New York.

She is active on Twitter (@bdutt) where she is followed by more than six hundred thousand people.