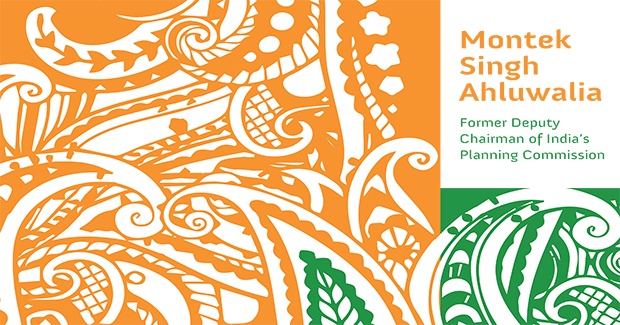 This is the first of a two part lecture series, the second lecture will take place on Wednesday, October 28, 2015.

Montek Singh Ahluwalia has served as a high-level government official in India, as well as with the IMF and the World Bank. He has been a key figure in India’s economic reforms since the mid-1980s. Most recently, Mr. Ahluwalia was Deputy Chairman of the Planning Commission of India from July 2004 till May 2014. In addition to this Cabinet level position, Mr. Ahluwalia was a Special Invitee to the Cabinet and several Cabinet Committees. In 2011, he was awarded the prestigious “Padma Vibhushan”, India’s second highest civilian honor, by President of India for his outstanding contribution to economic policy and public service.

Prior to his position as Deputy Chairman, Mr. Ahluwalia was appointed the first Director of the newly created Independent Evaluation Office of the International Monetary Fund, a position he held for three years. From 1979 to 2001 he served the Government of India as Economic Advisor in the Ministry of Finance, after which he held a series of positions including Special Secretary to the Prime Minister Rajiv Gandhi, Commerce Secretary, Secretary in the Department of Economic Affairs, Finance Secretary in the Ministry of Finance, Member of the Planning Commission and Member of the Economic Advisory Council to the Prime Minister. Mr. Ahluwalia joined the World Bank’s Young Professionals Program in 1968 and then held various positions, including Chief of the Income Distribution Division. Mr. Ahluwalia received a BA (Hons) degree from St. Stephens College, Delhi University. He went to Oxford as a Rhodes Scholar and received an M.A. and an M.Phil degree in Economics from Oxford University. He has received several honorary doctorates, including the Doctor of Civil Law (Honoris Causa) from Oxford University.

Mr. Ahluwalia has written on various aspects of development economics, including Indian economic policy, and his articles have been published in a number of professional international journals and also in books. He co-authored Re-distribution with Growth: An Approach to Policy (1975). He also wrote, “Reforming the Global Financial Architecture”, which was published in 2004 as Economic paper No.41 by the Commonwealth Secretariat, London. Mr. Ahluwalia is an honorary fellow of Magdalen College, Oxfor and a Member of the Governing Council of the Global Green Growth Institute, a new international organization based in South Korea. He is a Member of the Alpbach - Laxenburg Group established by the International Institute for Applied Systems Analysis (IIASA), and the Alpbach Economic Forum.