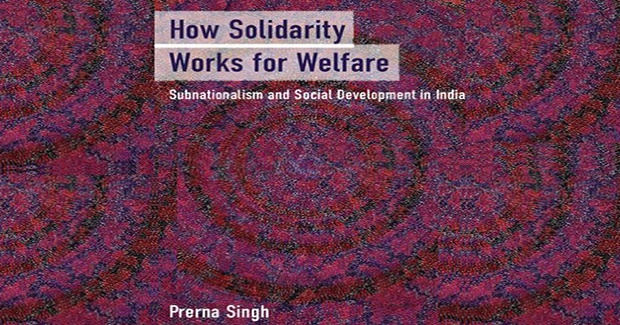 The India Initiative is excited to announce a new faculty publication, How Solidarity Works for Welfare: Subnationalism and Social Development in India(Cambridge University Press 2016), by Prerna Singh, Mahatma Gandhi Assistant Professor of Political Science and International and Public Affairs.

According to Daniel Posner, the James S. Coleman Professor of International Development at the University of California, Los Angeles the book is, “A must-read for anyone interested in understanding the sources of social welfare improvements in developing nations. . .” This is not surprising given that the driving force of the book is one of ‘big’ questions we have come to expect from Singh’s research: Why are some places characterized by better welfare regimes and social outcomes than other places?

Singh explores why some states in India have social development outcomes that are worse than countries in sub-Saharan Africa, while other states have welfare levels equivalent to those in industrialized countries. In a country the demographic size of India, these divergences translate into dramatic differences in the quality of life for millions. In the 1950s, residents of Bihar were less than half as likely to be literate as people in Himachal Pradesh. In the 1990s, children born in Madhya Pradesh were five times less likely to survive through infancy than those born in the state of Goa. Even today, women in Maharashtra are four times less likely to die during childbirth than their counterparts in Assam. What explains these differences? Why have Indian states, bound by the same legal, financial and electoral systems, remained worlds apart in social development?

Singh points to a factor that has been virtually ignored in the vast scholarship on social welfare and development—the solidarity that emerges from a sense of shared identity. A sense of oneness with a political community, Singh argues, can be a key driver of differences in social policy and welfare. States characterized by a stronger sense of subnational solidarity, or subnationalism, are more likely to institute a progressive social policy and witness developmental gains. In the book, she delineates this argument through a combination of a comparative historical analysis of five Indian states — detailed case studies of Tamil Nadu, Kerala, Rajasthan and Uttar Pradesh from the mid-nineteenth century onwards, and a shorter shadow study of Bihar — as well as a statistical analysis of all Indian states from the 1970s to the 2000s. The argument marks a radical departure from the traditional emphasis on the role of class as well as from the dominant view of the negative implications of identity in the scholarship on welfare.

Singh has been thoughtful not only in the content of the book but its cover as well, which features a painting by leading international artist Bharti Kher from her famous bindi series. Singh describes the selection of the work in her acknowledgements, “One of the highs of this project has been to see reflected, or perhaps it would be more accurate to say, to be able to project, the argument about the power of nested identities in the fierce delicacy of the art work of Bharti Kher. Insofar as the artist’s generosity means that ‘The Deep Abyss’ (bindi on board) is now the visual gateway into this text, I very much hope this book will be judged by its cover.”

This year Professor Singh has been on sabbatical digging through archives across Delhi, Kolkata, Chennai, Shanghai, Hong Kong, Geneva and London for a new book project that tries to understand the causes for the differential effectiveness of public health campaigns in India and China from the 1800s onwards. The project will be a comparative analysis of the way in which the Chinese and Indian states have been able to elicit societal cooperation with public health aims, especially when this has entailed inducing behavioral change, such as is required in rolling up your sleeve, adopting a method of family planning, or vaccinating a young child.

An engaging Book Adda discussion is planed for the fall of 2016, when professor Singh will return to Brown!