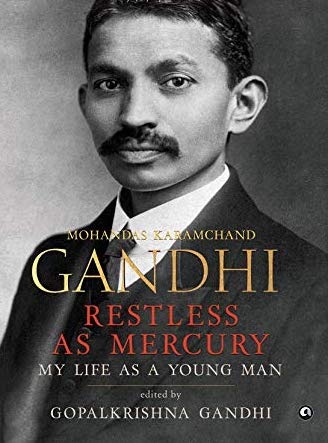 CCSA's spring 2020 Meera and Vikram Gandhi Fellow, Gopalkrishnan Gandhi, has released an edited volume, Restless as Mercury: My Life As a Young Man Mohandas Karamchand Gandhi (Aleph 2021, available in print or on kindle).

‘Restless as mercury’, is how M. K. Gandhi’s only sister, Raliyat, described the young Mohandas and her stunningly accurate characterization of her brother provides the title of this work, which Gopalkrishna Gandhi has reconstructed from Gandhi’s own words. M. K. Gandhi’s autobiography, The Story of My Experiments with Truth, is famously incomplete, stopping abruptly in 1920. But while he gave up writing his memoirs, Gandhi continued to speak and write about his life, family, work, colleagues, those who opposed and venerated him, his hopes, anxieties, challenges, fasts, many jail stints, his enthusiasms, and disappointments. When knitted together, these autobiographical observations, scattered over several pages of the Collected Works of Mahatma Gandhi, as well as in some works that were published in his lifetime under his gaze, make for a gripping and powerful story. Read more about the book on the Aleph Company's website or an exerpt published by Scroll.in.

Gopalkrishna Gandhi read English Literature at St Stephen’s College, Delhi. A former administrator and diplomat, he has translated The Tirukkural from the Tamil, authored a novel, Refuge, and a play in English verse, Dara Shukoh. He is currently Distinguished Professor at Ashoka University.