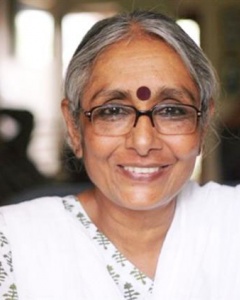 Aruna Roy is one of India’s most prominent activists. She was a civil servant from 1968 to 1975. In 1975 she resigned from the Indian Administrative Service to work with the rural poor in Rajasthan. Along with Nikhil Dey, Shankar Singh, and several others from the local community in Devdungri district, she collectively formed the MKSS Mazdoor Kisan Shakti Sangathan (Organisation for the Empowerment of Workers and Peasants) in 1990. The MKSS played a pivotal role in drafting and advocating for the Right to Information Law which was passed by the Indian Parliament in 2005. She has also worked with campaigns for the access of the poor to constitutional rights for equality and justice- the Right to Work, Food Security and the Peoples’ Union for Civil Liberties.

She worked as a member of India’s National Advisory Council from 2004-06 and 2010-13. As member of the Council she played a crucial role in the passage of national legislations for the Right to Information and the Right to Employment law (MGNREGA) in 2005. The RTI is the first national legislation in which a peoples’ campaign played such a significant role from enunciating the principles to drafting the law and over seeing it through parliament. Studies have shown that an estimated 8 million applications seeking information under this law are filed every year.

She is a prominent member of many democratic struggles and campaigns, and currently is the President of the National Federation of Indian Women (NFIW). She was awarded the Ramon Magsaysay Award in 2000, the Nani Palkiwala Award and the Lal Bahadur Shastri National Award for Excellence in Public Administration, Academia and Management in 2010, and listed as one of the 100 most influential people in the world by the TIME Magazine for 2011.

Aruna along with the MKSS Collective have recently published – “The RTI Story: Power to the People”- which tells the story of how ordinary people can come together and prevail against great odds, to make democracy more meaningful.