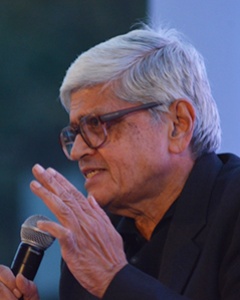 Professor of History and Politics at Ashoka University, India, Gopalkrishna Gandhi is, by training, an administrator.  His working career has included public administration, diplomacy and the exercise of constitutional responsibility.

Born in 1945, he read English Literature and History at St Stephen’s College, Delhi, and through the system of competitive examinations, joined the Indian Administrative Service (IAS) in 1968.  He served as an IAS officer for nearly twenty-five years. During that span, he worked in the state of Tamil Nadu and at the national capital. When working as Secretary to the Governor of Tamil Nadu, he was asked, in 1985, by the then Vice President of India, R. Venkataraman, to join him as his Secretary.  On his election as President of India in July 1987, he was Joint Secretary to President Venkataraman for the entirety of his term (1987 to 1992).

Gopalkrishna Gandhi took voluntary retirement from the IAS in 1992 and set up the Nehru Centre of the High Commission of India, London, and became its founding Director.  The Nehru Centre, which he headed for four years (1992-1996), is now an established forum for Indo-British mutuality in the cultural, literary and academic fields.

His first ambassadorial appointment was as India’s High Commissioner to South Africa (1996-1997).  In that position, he was privileged to report to the Government of India on the remarkable transition of South Africa under President Nelson Mandela’s redemptive leadership.

While working as High Commissioner for India in Pretoria, India’s newly elected tenth President, K.R. Narayanan (scholar, diplomat and the first Dalit to hold the highest Constitutional office of India), invited him to be his Secretary (1997-2000).  Subsequently, he was India’s High Commissioner to Sri Lanka (2000 to 2002) and Ambassador to Norway (2002 to 2004). Finally, in 2004, he was appointed Governor of the state of West Bengal, a position he held until 2009.

His published works include: a novel, Saranam, on the life of Sri Lanka’s plantation workers, published by Affiliated East-West, Madras in 1985, with a foreword by Kamaladevi Chattopadhyay, republished as Refuge by Ravi Dayal in 1989 and by Penguin Books India in 2010; a play, Dara Shukoh, on the tragic story of that Moghul prince, published by Banyan in 1993 and republished by Tranquebar in 2010; a translation into Hindustani of Vikram Seth’s novel A Suitable Boy, published by Vani Prakashan as Koi Achchha Sa Ladka in 1997; The Oxford Gandhi (Oxford University Press, 2007); A Frank Friendship: Gandhi and Bengal, with a foreword by Amartya Sen (Seagull, 2007); Of a Certain Age – Twenty Life-Sketches (Penguin India, 2011); My Dear Bapu – Correspondence between C.Rajagopalachari and Mohandas K.Gandhi  (Penguin, 2012); The Tirukkural (translated into English, Aleph, 2015); and The Death Penalty (Aleph, 2016).

He received the Sarvepalli Radhakrishnan Award of the University of Mysore in 2016, the Lal Bahadur Shastri Award in 2016 and the Rajiv Gandhi Sadbhavana Award in 2018.

A monthly columnist for The Hindustan Times (New Delhi), The Telegraph (Kolkata) and Scroll, he writes from time to time for The Hindu (Chennai) as well.  His interests center around reading archival records pertaining to what may be called the Gandhi-Nehru era of modern Indian history.

Gopalkrishna Gandhi and his wife Tara, an ornithologist and nature conservationist, live in Chennai, India.