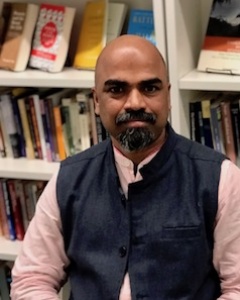 Kalaiyarasan is a Fulbright-Nehru post-doctoral fellow at the Watson Institute for International and Public Affairs in Brown University and an Assistant Professor at the Madras Institute of Development Studies, Chennai, India. He was previously with National Institute of Labour Economics Research and Development, a research wing of NITI Aayog (Planning Commission), Government of India.  He received his Ph.D. in Development Economics from Jawaharlal Nehru University, New Delhi, India.

His academic interest lies in the intersection of caste and economic processes in India. While his doctoral thesis explored the differences in aggregate economic and social outcomes in sub-national states in India and how caste based social mobilization weakened social hierarchy and made economic growth inclusive in Tamil Nadu, his works in collaboration with Prof. Christophe Jaffrelot have explored the relationship between economic processes and changing caste realities in India.

Beside his publications in reputed journals like Economic and Political Weekly, Seminar and Prospects, his work has also appeared in prominent Indian dailies like The Indian Express and Livemint.

2020       “Dominant Castes, from Bullock Capitalists to OBCs? : The Impact of Class Differentiation in Rural India” in Situated Knowledge in the Study of Social Change and the State (eds.) John  Echeverri-Gent and Kamal Sadiq, Oxford University Press: New Delhi. (Jaffrelot C., in press)