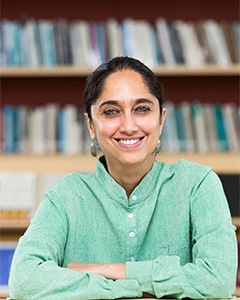 Director, Pembroke Center for Teaching and Research on Women
John Hawkes Professor of the Humanities and English

Gandhi is a literary and cultural theorist whose research and teaching focus on transnational literatures, postcolonial theory and ethics, and the intellectual history of the nineteenth and twentieth centuries. She received her B.A. from the University of Delhi, her M.Phil. and D.Phil. from Oxford University, and before coming to Brown she taught at the University of Chicago, Delhi University, and La Trobe University. Gandhi has had several publications, including being a founding co-editor of the journal Postcolonial Studies and editorial board member of Postcolonial Text. She is a Senior Fellow of the School of Criticism and Theory at Cornell University.