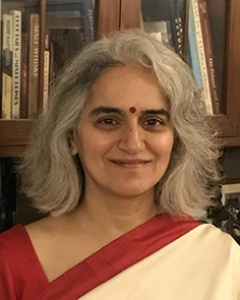 Nayanjot Lahiri is Professor of History at Ashoka University. She was previously a professor in the Department of History at the University of Delhi. Educated at St. Stephen’s College, Delhi,  and at the Department of History, University of Delhi, she taught at Hindu College from 1982 till 1993, and thereafter at the Department of History. She has served as Dean of Colleges at the University of Delhi from 2007 till 2010 and as Dean of International Relations from 2006 till 2007. Nayanjot Lahiri has been  Member, Delhi Urban Art Commission (2007-2010), and currently serves on the Council of the Indian Council of Social Science Research (ICSSR) and on the Nehru Memorial Museum and Library Society (New Delhi). She was also  member of a committee set up by the Government of India in 2010 to analyse the impact of the Ancient Monuments and Archaeological Sites and Remains (Amendment and Validation) Ordinance, 2010 and to draft an alternative bill for Parliament. The bill became law in March 2010.

Nayanjot Lahiri’s research interests include Ancient India, Indian archaeology, and heritage studies. She is author of Pre-Ahom Assam(1991), The Archaeology of Indian Trade Routes (upto c. 200 BC) (1992), Finding Forgotten Cities- How the Indus Civilization was Discovered (2005), Marshalling the Past: Ancient India and its Modern Histories (2012) and Ashoka in Ancient India (2015). She is co-author of Copper and its Alloys in Ancient India (1996), editor of The Decline and Fall of the Indus Civilization (2000), co-editor of Ancient India: New Research (2009), Buddhism in Asia – Revival and Reinvention (2016) and an issue of World Archaeologyentitled The Archaeology of Hinduism (2004). Her writings have also appeared in peer-reviewed journals like Antiquity, Journal of the Economic and Social History of the Orient, The Indian Economic and Social History Review, World Archaeology and Economic and Political Weekly. At present, she is working on a history of Indian archaeology since Independence.

Nayanjot Lahiri won the Infosys Prize 2013 in the Humanities-Archaeology. Her book Ashoka in Ancient India was awarded the 2016 John F. Richards Prize by the American Historical Association for the best book in South Asian History.