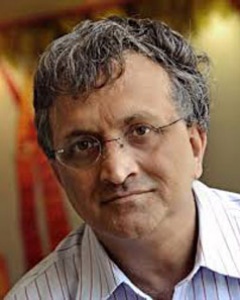 Ramachandra Guha is a prominent author and columnist based in Bangalore. Born in Dehradun in 1958, he earned his Bachelor of Arts Degree in Economics from St. Stephen's College, a master's degree from the Delhi School of Economics (MA), and his Ph.D. in Sociology from the Indian Institute of Management at Kolkata, where he wrote a doctoral thesis on the history and prehistory of the Chipko movement. Now a full-time writer, he has previously taught at the universities of Yale and Stanford, held the Arné Naess Chair at the University of Oslo, and been the Sundaraja Visiting Professor at the Indian Institute of Science. He has been a Fellow of the Wissenschaftskolleg zu Berlin, served as the Indo-American Community Chair Visiting Professor at the University of California at Berkeley, and has also occupied the prestigious Phillipe Roman Chair in History and International Affairs at the London School of Economics.

Dr. Guha's research interests have included environmental, social, political, and cricket history, and his writings cover a wide range of themes. His books include a pioneering environmental history, The Unquiet Woods: Ecological Change and Peasant Resistance in the Himalya (Oxford University Press, 1989); Savaging the Civilized: Verrier Elwin, His Tribals, and India (University of Chicago Press, 1999), a life of the anthropologist-activist Verrier Elwin, which the Times Literary Supplement called the "best biography by an Indian for many years," an award-winning social history of cricket, A Corner of a Foreign Field (Picador 2003), which was awarded the Daily Telegraph Cricket Society Book of the Year prize, and India after Gandhi: The History of the World's Largest Democracy (Picador, 2007), a widely discussed and also award-winning history of India since independence.  His most recent book, Gandhi Before India (2013), focus on Gandhi's years in South Africa.

Aside from his scholarly work, Guha writes regularly on social and political issues for the general public. Between 1997 and 2009 he wrote a fortnightly column for The Hindu, India’s national newspaper. He now writes a fortnightly in The Telegraph which appears appearing in translation in other Indian newspapers (such as Hindustan, Sadhana, Prajavani, and Andhra Jyoti).

Guha’s awards include the Leopold-Hidy Prize of the American Society of Environmental History, the Malcolm Adiseshiah Award for excellence in social science research, the Ramnath Goenka Prize for excellence in Journalism and Mac Arthur Research and Writing Award. He has also been honored with the R. K. Narayan Prize and the Padma Bhushan. The New York Times has referred to him as "perhaps the best among India’s non fiction writers"; Time Magazine has called him "Indian democracy’s preeminent chronicler".

Tuesday, November 5th, 2013 | The Diasporic Roots of Gandhi's Pluralism
Gandhi was a Hindu who befriended Muslims, Christians and Jews; a Gujarati speaker who came to admire all the languages of the Indian sub-continent (and spoke and wrote beautiful English too); a man who advocated equal rights for women; and an upper caste individual who rejected the prejudices of the caste system. This lecture will argue that the roots of Gandhi’s pluralist, inclusive vision lie in his largely forgotten years in London and South Africa. It was his decades in the diaspora that allowed him to more deeply understand what divides, and what unites, humans in general and Indians in particular.

Wednesday, November 6th, 2013 | Gandhi, Ambedkar, and the Dalit Question
From his earliest days as a social activist, Gandhi campaigned for the abolition of untouchability. Upper caste Hindus were appalled at his attacks on orthodoxy. They thought he was going too fast, yet the great lawyer-scholar B. R. Ambedkar, born into an Untouchable home himself, thought he was going too slow. This lecture will explore the paradoxes of Gandhi's position, and analyse the ways in which his approach diverged from that of Ambedkar. Finally, it will pose the question: while Gandhi and Ambedkar were undoubtedly political rivals in their lifetime, now, sixty years after both have passed on, should we not draw on both their legacies in the still unfinished fight against prejudice and orthodoxy?

Friday, November 8th, 2013 | Was Gandhi an Environmentalist?
Gandhi is known (and admired) as a critic of colonialism, as a theorist and practitioner of non-violence, as a religious pluralist, and as an advocate of gender and caste equality. Of late, attention is also being paid to his work as a writer and editor. And there were yet other aspects to his life and thought. Thus, this lecture will argue that in some crucial ways Gandhi anticipated the environmental crisis that humanity finds itself in today. I will construct a ‘Gandhian’ environmental philosophy from clues in his writings, and explore how his ideas have shaped and influenced environmental struggles in India and beyond.