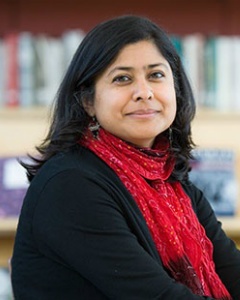 With a commitment to public engagement, in addition to giving academic talks, she has been involved in the organization of large public teach-ins on campus, on the floods in Pakistan in 2010, and on the Occupy movement in 2011. She has also worked withPrimary Source and the Choices program, FirstWorks Providence, the RISD Museum, as well as more recently with the Lahore Museum. On campus, she remains active in organizing and supporting an array of South Asia related events, including the South Asia Documentary Film Festival in 2011 and the Questioning Marginality conference in 2013.

Zamindar was supported by CCSA for a forthcoming project titled: On Walking with Gandhi.