Central Falls and its Mayor Look Towards the Future 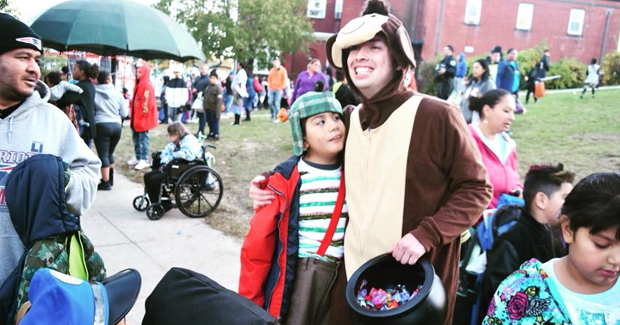 James Diossa, the Mayor of Central Falls, RI, buttons up his teddy bear costume and steps out from his office into the Halloween crowd enjoying themselves in Jenks Park. After six years in office, he’s well-known around the city of Central Falls, population 19,000, and many of the costumed parents recognize him and stop to say hello. For a city that was brought into federal bankruptcy in 2011, community events like this Halloween festival show Diossa’s, and the city’s, vigor.

The 32-year-old son of Colombian immigrants fleeing poverty and violence in Medellín, Diossa has helped revitalize one of Rhode Island’s most troubled cities. With a median household income of $29,108, or about half of the nationwide median of $56,516, Central Falls is one of the poorest cities in the state. The 60% Latino city is also estimated to be the home of between five and six thousand undocumented immigrants. Many of these immigrants have left desperate conditions in Central America to find work in Rhode Island, much like Diossa’s parents did.

Integrating undocumented immigrants, and the broader immigrant population, into the community is one of Diossa’s priorities. He says there’s a “lack of trust” in government among immigrants, often the product of violent and corrupt politics back home. Overcoming this suspicion has been as one of his toughest challenges in office. To earn the trust of his constituents, he’s fought to keep the local library open after budget cuts threatened its funding and made local government more accessible to Spanish and Portuguese speakers. A tutoring center even offers free help for students whose parents aren’t native English speakers.

Some of Diossa’s toughest decisions in office have been to put off desperately needed infrastructure projects because the city couldn’t afford them. He remembers deciding not to renovate run-down sanitation infrastructure and city parks during his first year, the same parks where he played soccer growing up. But, though its last mayor was indicted for corruption, the city’s finances have sbeen improving. Now, Diossa proudly says there is enough funding for events like this year’s Halloween festival and a series of popular summer salsa nights.

Although he won his first election by a mere 17 votes after being inspired by Obama’s 2008 win, after six years as mayor he sees himself staying in politics. He emphasizes how important inspiring the next generation of young Latinos to engage in local politics is to him.