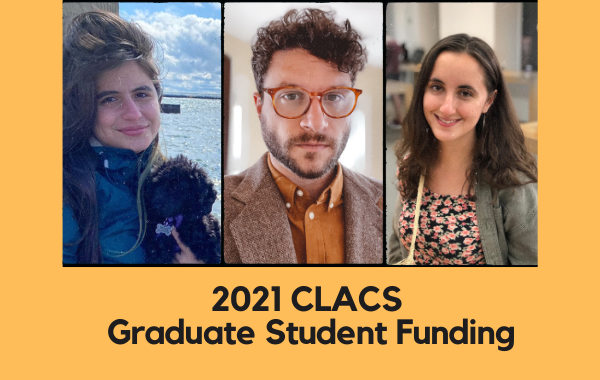 CLACS is pleased to announce that we have awarded three summer research grants to graduate students.

Alejandra Cueto (Sociology) and Luiz Paulo Ferraz (History) received travel grants through the CLACS Pre-Dissertation Research Award. This award is sponsored by the Graduate School and the Watson Institute for International and Public Affairs.

Adelaida Tamayo (Anthropology) has received an award through the Sarmiento Flexible Fund for Latin American Studies, which was established through the generous support of Alfredo C. Cassiet, M.D. and Maria-Elena Cassiet. For more information on these opportunities, visit us at https://watson.brown.edu/clacs/opportunities.

Learn more about the CLACS Graduate Students who received funding this year below:

Alejandra Cueto is a doctoral student in the Sociology Department at Brown University, affiliated to the Center for Latin American and Caribbean Studies (CLACS) and to the Graduate Program in Development at the Watson Institute. She holds a BA degree in Sociology from the Pontificia Universidad Catolica del Peru and a MA degree in Sociology from Columbia University in New York City. Her research addresses the interface between cultural sociology, development, and immigration. Specifically, she is interested in understanding immigrant workers’ experiences in the informal economy and as entrepreneurs. Also, she is interested in the categorization by international organizations and national bureaucracies of entrepreneurship and the informal economy as separate sectors. She has also researched the experiences of immigrant street vendors in NYC. Before her studies in the US, she conducted research on labor inspections in Lima, Perú, and the role of doctors’ unions across Peru.

Alejandra will conduct preliminary dissertation research on the creation of entrepreneurship as an economic elite and its differentiation with other types of labor regimes. Her study will investigate how race, gender, and migration status play a role in the categorization of entrepreneurship and how this affects their access to resources and knowledge. More specifically, the study will examine how the state, national, and international organizations help build boundaries between those who belong to the informal sector and those who claim to be entrepreneurs. For her project, she will conduct interviews with informal workers and entrepreneurs in Buenos Aires, Argentina.

Luiz Paulo Ferraz is a doctoral student in History at Brown University (USA), affiliated with the Native American and Indigenous Studies Initiative (NAISI) and the Center for Latin American and Caribbean Studies (CLACS). He has a BA & MA degree in history from the Federal University of Pernambuco (UFPE), with a study period at the Universidad de Sevilla (Spain). He is one of the creators of the public history project História ao Ar Livre (Open-Air History) that, since 2015, has been developed in the city of Recife, Brazil. He also teaches at the ENEM Preparatory for the Dean of Extension, Culture, and Citizenship (PREPEX) at the Federal Rural University of Pernambuco (UFRPE). He has long experience teaching in elementary and high schools in Recife, Brazil. His doctoral research focuses on the intersection of Indigenous and environmental history from a national and transnational perspective, analyzing the rise of Brazil's Indigenous movement and environmental consciousness during the military dictatorship (1964-1985) in relation to discourses of development and inequality.

Luiz Paulo will conduct preliminary dissertation research that analyzes the struggles for rights, land, and the state recognition of Indigenous identity in the Brazilian northeast during the military dictatorship (1964 - 1985). The research will focus on the strategies Indigenous peoples used to organize themselves during this period and their interactions with the military, the state, and institutions such as the National Indian Foundation (FUNAI) and the Missionary Indigenist Council (CIMI). For this project, he will visit several archives in Recife, Rio de Janeiro, and Brasília.

Adelaida Tamayo is an anthropologist focused on women's narrative of the conflict in Colombia. She uses visual methods to tell the story of the conflict desde abajo. Before Brown, Adelaida worked at Art Without Borders in Bogotá (FASF), Human Rights Watch, Her Justice, and Planned Parenthood. She is originally from Colombia, and likes to paint in her free time.

Adelaida will be conducting her MA research about mothers' advocacy for their children who were killed during the False Positive scandal. Her research question asks: How does emotion, particularly grief, become a resource for political action for mothers in Colombia? What possibilities do art and visual media create for Colombian women to produce a collective memory from below? She will be conducting this research in her hometown of Bogotá.

CLACS will welcome applications for travel during Winter Break (December 2021/January 2022) in the coming months.

More information will be published on our website in September.

This and all other travel must be completed in accordance with university protocols.