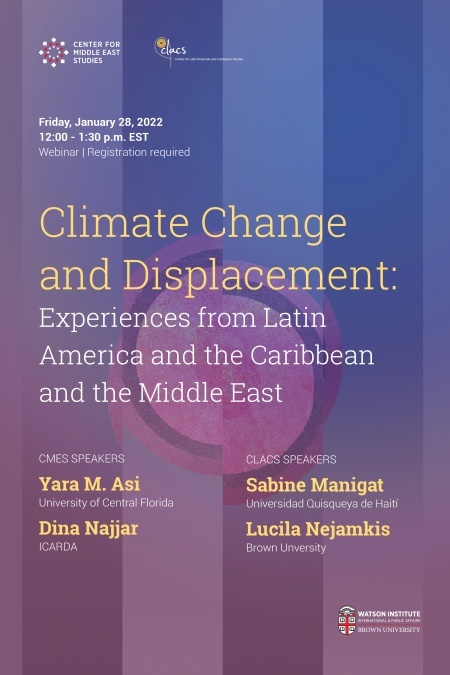 If you missed the event, you can watch the recording on YouTube.

Migration within and across borders has become a global concern as people flee violence, political and social instability, and economic hardship. The effects of climate change, in particular, rising temperatures, sea levels, more intense storms, and droughts, already exacerbate existing vulnerabilities and are expected to become more significant in driving migration.

This discussion focused on the experiences of migrants in Latin America, the Caribbean, and the Middle East, exploring how climate change and environmental hazards exacerbate existing vulnerabilities and affect patterns of migration and the challenges that migrants face negotiating these, with a particular focus on the experiences of women. The Center for Latin American and Caribbean Studies (CLACS) and the Center for Middle East Studies (CMES) partnered to host the discussion, which was covered in the Brown Daily Herald.

The speakers' bios are listed below:

Dina Najjar joined the International Center for Agricultural Research in the Dry Areas (ICARDA) in 2014 as a social and gender specialist. A socio-cultural anthropologist by training, she focuses on the link between gender equality and policies, agricultural technologies and delivery systems, rural employment and migration, adaptation to climate change, and productive assets, including access to land and ownership, in the Middle East and North Africa. Her geographical expertise includes Egypt, Jordan, Morocco, Algeria, Tunisia, and Sudan. She has also conducted research in Uzbekistan, Kenya, Ethiopia, and India. Dr. Najjar is fluent in Arabic and proficient in French and Swahili. She received her Ph.D. in anthropology from the University of Western Ontario, Canada.

Lucila Nejamkis is the Craig M. Cogut Visiting Professor at the Center for Latin American and Caribbean Studies (CLACS), Brown University, for the 2021-2022 academic year. She is from Argentina and is currently a researcher in the Technological and Scientific Research National Council (CONICET,) an associate professor at Arturo Jauretche National University, and an associate researcher at IDAES (National University of San Martin, UNSAM), where she co-directs a migration studies center. Her work focuses on migration in Argentina and Mercosur through a variety of frameworks dealing with public policy, the state, nationality, citizenship, and human rights.

The recording of the event is now available via YouTube.