Caring for US Veterans 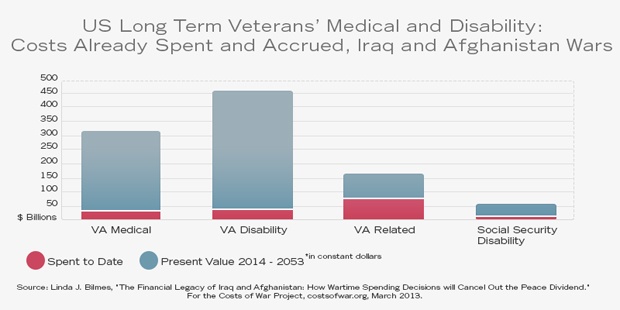 Since 2001, 2.7 million service members have served in Iraq and Afghanistan. Many have been wounded or injured, and suffer from conditions ranging from brain injuries to hearing loss. The United States has already spent $160.4 billion providing medical care and disability benefits to these veterans.

But the commitment to veterans continues after the war ends. Those who have been deployed to Afghanistan and Iraq are entitled to free or subsidized medical treatment for the rest of their lives. In addition, a significant percentage of them are eligible to receive lifelong compensation for disabilities stemming from their wartime service. Veterans of the current wars are also entitled to certain educational, housing, training and other benefits funded by government agencies outside the VA.

Historically, the cost of caring for war veterans rises for several decades and peaks 30 to 40 years or more after a conflict. This will be especially true for veterans of the current wars, who are already utilizing VA medical services and applying for disability benefits at much higher rates than in previous wars.

Finally, there are significant other costs that will be borne by these veterans and their families. Family members of the injured often give up their jobs to become unpaid caregivers and self-employed service members lose income, for example.

Although veterans’ care comprises the fourth largest category of government spending, the magnitude of Iraq and Afghanistan veterans’ costs is grossly understated in government projections. There is no provision set aside to cover these future obligations.

The Cost of Iraq and Afghanistan Veterans’ Care to Texas

The Financial Legacy of Iraq and Afghanistan: How Wartime Spending Decisions will Cancel Out the Peace Dividend