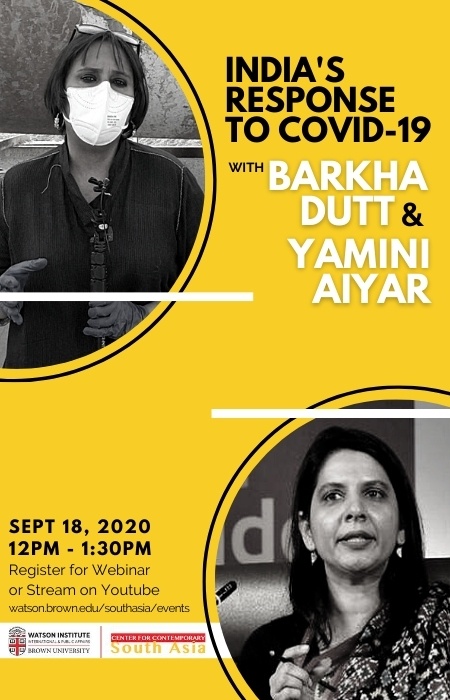 Barkha Dutt is an award-winning TV journalist, anchor and columnist with more than two decades of reporting experience. She is India’s only Emmy-nominated journalist who has won multiple national and international awards, including the Padmashri, which is India’s fourth highest civilian honour. Barkha graduated from St. Stephen’s College, Delhi with a degree in English Literature. She did her Master's in Journalism from the Graduate School of Journalism at Columbia University in New York.

Barkha has reported from some of the toughest spots and conflict zones in India and across the world including Pakistan, Iraq, Afghanistan, Libya and Egypt. Her frontline reporting of the Kargil war first made her a household name. She is an out spoken feminist voice on the global stage and also the Founder-Editor of Mojo, a multi-media events and content venture. She is also the founder of 'We The Women', a multi-city festival and current affairs website that focuses on the biggest gender debates of our time. She is a featured Columnist with Washington Post; appears regularly as an analyst on CNN and BBC and is also a Contributing Editor at The Week magazine.

Yamini Aiyar is the President and Chief Executive of CPR. Her research interests are in the field of  social policy and development. In 2008, Yamini  founded the Accountability Initiative at CPR. Under her leadership, the Accountability Initiative has produced significant research in the areas of governance, state capacity and social policy. It pioneered a new approach to tracking public expenditures for social policy programs and is widely recognised for running the country’s largest expenditure-tracking survey in elementary education. Yamini’s own research on social accountability,  elementary education, decentralisation and administrative reforms has received both academic and popular recognition.

Yamini Aiyar is a TED fellow and a founding member of the International Experts Panel of the Open Government Partnership. She has also been a member of the World Economic Forum’s global council on good governance. Previously, she has worked with the World Bank’s Water and Sanitation Program and Rural Development unit in Delhi, where she focused on action research aimed at strengthening mechanisms for citizen engagement in local government. Additionally, she was a member of the decentralisation team at the World Bank that provided policy support to strengthen Panchayati Raj (local governance) in India.