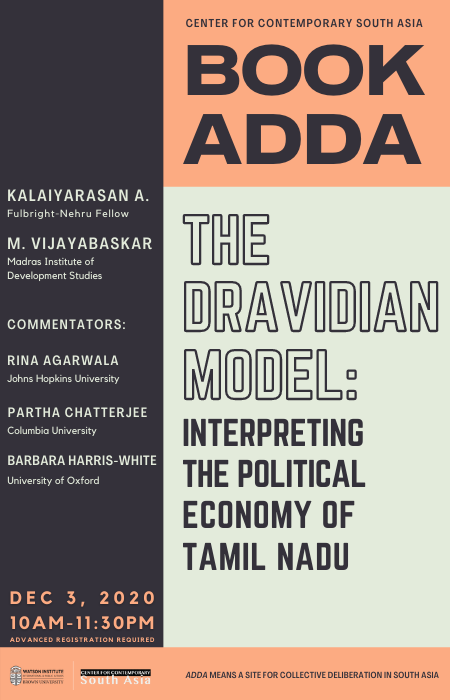 Kalaiyarasan is a Fulbright-Nehru post-doctoral fellow at the Watson Institute for International and Public Affairs in Brown University and an Assistant Professor at the Madras Institute of Development Studies, Chennai, India. He was previously with National Institute of Labour Economics Research and Development, a research wing of NITI Aayog (Planning Commission), Government of India. He received his Ph.D. in Development Economics from Jawaharlal Nehru University, New Delhi, India. His academic interest lies in the intersection of caste and economic processes in India. While his doctoral thesis explored the differences in aggregate economic and social outcomes in sub-national states in India and how caste based social mobilization weakened social hierarchy and made economic growth inclusive in Tamil Nadu, his recent works in collaboration with Christophe Jaffrelot explore the relationship between economic processes and changing caste realities in India.

M. Vijayabaskar is a Professor at the Madras Institute of Development Studies, Chennai. His research centers on political economy of development with a focus on labour and land markets, rural-urban linkages, transformations and their intersections with policy-making.  In addition to publishing in numerous scholarly journals and media outlets, he has co-edited monographs including Rethinking Social Justice (Orient Blackswan 2020), Participolis: Consent and Contention in Neoliberal Urban India, (Routledge 2012) and ICTs and Indian Social Development: Diffusion, Governance, Poverty (Sage 2008).  He has been a Visiting Professor at École des haute sétudesen sciences sociales (EHESS), Paris, University of Lausanne, Switzerland, a visiting Fellow at the School of Oriental and African Studies, University of London and has taught at the IIT Madras. He is on the editorial advisory board of Oxford Development Studies and has also served as a consultant to the ILO, UNICEF and UNRISD.  He holds a PhD in Economics from Jawaharlal Nehru University.