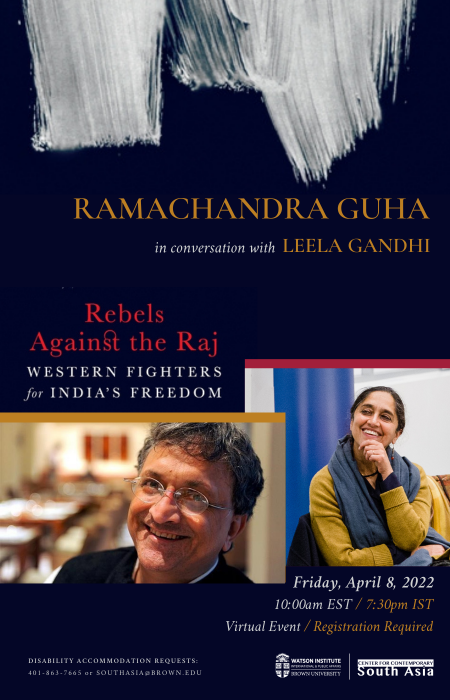 Join Leela Gandhi for a discussion with Ramachandra Guha on his new book Rebels Against the Raj: Western Fighters for India's Freedom.

Ramachandra Guha is a historian and biographer based in Bengaluru. His books include a pioneering environmental history, The Unquiet Woods (University of California Press, 1989), and an award-winning social history of cricket, A Corner of a Foreign Field (Picador, 2002), which was chosen by The Guardian as one of the ten best books on cricket ever written. India after Gandhi (Macmillan/Ecco Press, 2007; revised edition, 2017) was chosen as a book of the year by the Economist, the Washington Post, and the Wall Street Journal, and as a book of the decade in the Times of London and The Hindu.

About the book:
Rebels Against the Raj tells the story of seven people who chose to struggle for a country other than their own: foreigners to India who across the late 19th to late 20th century arrived to join the freedom movement fighting for independence from British colonial rule.

Of the seven, four were British, two American, and one Irish. Four men, three women. Before and after being jailed or deported they did remarkable and pioneering work in a variety of fields: journalism, social reform, education, the emancipation of women, environmentalism.

This book tells their stories, each renegade motivated by idealism and genuine sacrifice; each connected to Gandhi, though some as acolytes where others found endless infuriation in his views; each understanding they would likely face prison sentences for their resistance, and likely live and die in India; each one leaving a profound impact on the region in which they worked, their legacies continuing through the institutions they founded and the generations and individuals they inspired.

Through these entwined lives, wonderfully told by one of the world’s finest historians, we reach deep insights into relations between India and the West, and India’s story as a country searching for its identity and liberty beyond British colonial rule.