If you're fascinated by the diversity and complexity of the Caribbean region, the concentration in Latin American and Caribbean Studies (LACA) can give you a strong, interdisciplinary understanding of culture, history, and contemporary issues in the region, and help you situate the Caribbean within its hemispheric context. See here for two potential LACA course sequences focusing on Caribbean studies.

The Center for Latin American and Caribbean Studies and the Graduate Program in Development are proud to announce this year's participants in the second year of our exchange agreement with Universidad Nacional de San Martín (UNSAM) in Buenos Aires, Argentina.

Brown University invites applications for a 2-year International Postdoctoral Fellowship in the Department of Hispanic Studies and the Center for Latin American and Caribbean Studies, with a specialization in contemporary Mexican literary, visual, and/or performance studies. We especially welcome applicants working on narrative, poetry or drama about violence, social change and migration in relation to a broader Mexican and Latin American tradition or Mexican and U.S. border studies; a proven interest in film, visual arts, or digital culture and in critical theory is also desirable.

We are now accepting news submissions from our CLACS Affiliated Faculty to be featured in the Spring 2017 installment of the CLACS publication Focus on Faculty.

Vi Mai, a senior double concentrating in International Relations and Latin American & Caribbean Studies has received a CLACS Undergraduate Research Award to support her LACA honor thesis research which centers on analyzing discourses around Cuba's HIV/AIDS epidemic in the Cuban and the Cuban American press.

The Center for Latin American and Caribbean Studies (CLACS) is pleased to announce that it has awarded funding to two student/faculty reading groups as part of a new initiative.

The Center for Latin American and Caribbean Studies (CLACS) at Brown University is pleased to announce the recipients of the 2016-2017 Tinker Foundation Field Research Grants.

Professor of Sociology and CLACS Affiliated Faculty José Itzigsohn was recently awarded with the 2016 Faculty Award for Advising & Mentoring. We wish him congratulations!

CLACS is pleased to announce the visits of two Latin American scholars later this month. Juan Pablo Luna, from Chile, and Sebastián Etchemendy, from Argentina, will be participating in conferences and events at Brown throughout April and May. Luna is this semester’s Sarmiento Visiting Scholar of Latin American Studies. Etchemendy is a resident of Brown’s Graduate Program in Development and CLACS. 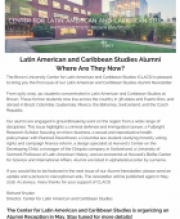 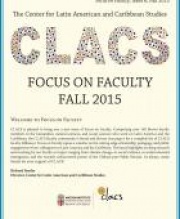 New Edition of Focus on Faculty!

CLACS is pleased to release the latest issue of Focus on Faculty. The publication highlights the exciting and varied work of Brown University faculty regarding Latin America and the Caribbean. This issue highlights exciting research and teaching by our faculty on topics ranging from climate change, to social violence, to undocumented immigrants, and the recently rediscovered poems of the Chilean poet Pablo Neruda. As always, many thanks for your support of CLACS! 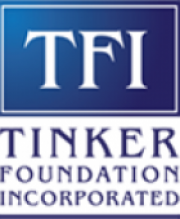 The Center for Latin American and Caribbean Studies (CLACS) at Brown University is proud to announce that it has been awarded a multi-year Field Research Grant by the Tinker Foundation. The grant provides $10,000 annually over three years to support pre-dissertation fieldwork in Latin America and the Caribbean by Brown doctoral students from all disciplines. The funds from the Tinker Foundation will be matched each year by the Watson Institute for International and Public Affairs and the Graduate School, bringing the total amount available to $20,000 per year.

Office of International Programs Launches Brown in Argentina and Brown in Chile! 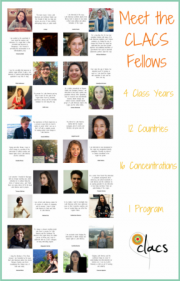 The CLACS Undergraduate Fellowship Program allows undergraduate students with an interest in Latin America and the Caribbean, and academic excellence, to explore in-depth what it means to work in/on the region. This fellowship program is open to students from all concentrations. This year's group of CLACS Fellows are particularly inspiring and diverse! They have spent significant time in twelve countries of the region, represent sixteen concentrations, and come from all class years at Brown.