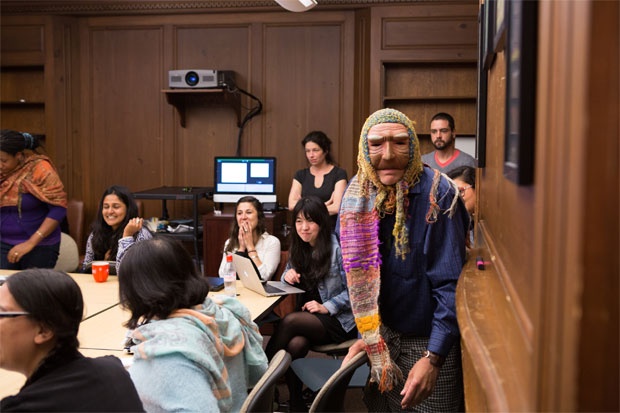 Convened by faculty from Brown’s Department of Theatre Arts and Performance Studies, this institute explored the role of theater, new media, and public performance in contemporary political and social movements, with a focus on the potential of diverse art forms to advance principles of non-violence, economic and political justice, and civic debate. What is new in today’s social and political movements? What do they owe to theories, traditions, and practices of expressive freedom and participatory politics? We invited scholars from the humanities and critically engaged artists and performers working in different genres to contribute to an interdisciplinary exploration of the ways in which creative production can expand the civic imagination and conjure new understandings of public space.

Professor of Theatre Arts & Performance Studies at Brown University
Erik conducts annual trips to Rwanda/Uganda, bringing teams to study the history there, and explore the ways art is participating in recovery from violence. He produces the Arts in the One World conference yearly, which engages themes of art and social change.

B.A., Columbia University, 1994, Ph.D., University of Minnesota-Twin Cities, 2002
Associate Professor of Theatre Arts & Performance Studies at Brown University
Patricia's area of specialization is theatre historiography of the Americas, with emphasis on the relationship between theatre, nationalism, and American identities in North America.