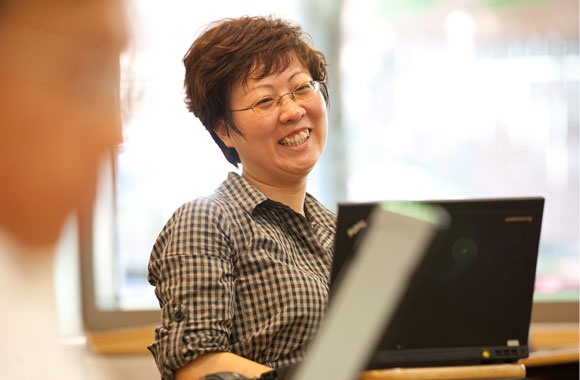 “Attending BIARI and listening to the lectures and the talks from my peers has opened up a whole new field.”

Chaochao Gao, associate professor at the College of Environmental and Resource Science at Zhejiang University in China

Once Was Not Enough

Inspired by the Connections She Made, a BIARI Alumna Comes Back for More

Despite the growing consensus that humans play a significant role in global warming through carbon dioxide emissions, many people still remain unaware or unconvinced that their consumption behaviors contribute to climate change. Chaochao Gao, associate professor at the College of Environmental and Resource Science at Zhejiang University in China, is out to change their minds.

Gao is an environmental scientist whose work detailing the science behind climate change is widely cited, including by the Intergovernmental Panel on Climate Change, a scientific body established by the United Nations. Based on dozens of ice core records, Gao has reconstructed the past 1500 years of climate history, enabling scientists to better understand current changes in the climate.

In 2012 Gao traveled from Hangzhou to Providence to take part in the Brown International Advanced Research Institutes (BIARI), an intensive interdisciplinary conference that convenes scholars from around the world – especially from Universities like Zhejiang that are members of the Santander Universities network – to address a vital issue. Gao was part of the Climate Change institute, where she presented her findings. While there, she met Maria Cecilia Trannin, a social scientist from Brazil who surveys consumption behaviors of university students and analyzes their impact on the environment.

She may be a natural scientist, but Gao admits that she’s always been concerned about the lack of a social response to climate change. She sees the social and scientific approaches as equally important, and is grateful to have a new perspective on climate change. “Attending BIARI and listening to the lectures and the talks from my peers has opened up a whole new field.”

Gao approached Trannin to find out how she could get involved. Together, they received a BIARI seed grant to expand the research from Brazil to China and, with the addition of another BIARI alumna Charlotte Kendra Gotangco, the Philippines.

The study, titled “Students, Consumption, and the Environment,” investigated university students’ perceptions of climate change and how those perceptions affect their lifestyles and consumption behaviors. Gao found that many respondents did not feel responsible for taking care of the environment, nor did they “associate the impact of their individual behavior to a wider context.” On the other hand, the study found that once students are informed about the impact of their behaviors, they are willing to try new ways of of saving energy, recycling, and otherwise living an “environmentally friendly life.”

With the project formally completed, Gao and her colleagues are eager to move beyond the initial phase, seeking new funding and collaborators and expanding the BIARI-inspired multi-country survey to more universities and possibly even other countries. Of particular interest are the so-called BRICS countries – Brazil, Russia, India, China, and South Africa. These five countries are rapidly industrializing, have fast-growing economies, and generate significant carbon emissions. With this goal in mind, Gao returned to BIARI 2014, to share their findings with a new cohort of potential collaborators.

While at BIARI 2012, Gao met a researcher from a university in Beijing with common research interests. Back in China, he invited Gao to join him on a major proposal to the Chinese Minister of Science and Technology on climate engineering. China emits more carbon than any other country, Gao says, and through this proposal “we are trying to identify the technology we need to switch to a more low-carbon economy and society.”

Gao met another professor from Zhejiang University that year, as well. The two attended the same institute, Climate Change, and became good friends. They subsequently teamed up to teach “Manufacturing and Environment,” an MBA course taught in collaboration with McGill University.

Gao laughs when asked if there are any other connections she made through BIARI. “Those are the visible ones,” she says, acknowledging the many unseen ways her time at the Watson Institute has shaped her recent career. “There might be other opportunities,” she says, “but this work is a good start.”