Human Rights Beyond the Law 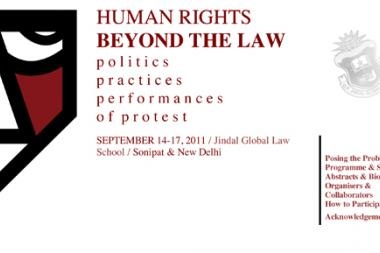 BIARI alumni funding was used to support a four-day protest workshop, “Human Rights Beyond the Law: Politics, Practices, Performances of Protest” organized by four 2009 Critical Global Humanities alumni. The workshop took place in September 2011 at the Jindal Global Law School in Sonipat and Delhi, India and brought together over 80 academics, activists, performers, filmmakers and artists from all over the world: Australia, Africa, Southeast Asia, Europe, the Americas, and South Asia. The workshop also allowed a large contingent of BIARI alumni from Latin America, Southeast Asia, and India, particularly, to reunite. The workshop aimed to “document practices and performances of protest--as Resistance, Solidarity and Insurgency--in the post colony that are deeply committed to talking ‘Human Rights’ but beyond and without the disciplined captivity of law, modernity and markets.” Furthermore, the workshop sought to challenge the hierarchies of knowledge that are often built into socio-legal studies. For a full description of the 2011 protest workshop, including schedules, biographies, and abstracts of presentations, please visit www.protestworkshop.jgu.edu.in.

The BIARI alumni who organized the event hope that it can act as a starting point for many more exciting opportunities for inter-disciplinary and cross-cultural scholarly exchange. This includes the three publications expected to come out of the workshop, with planned volumes to be published by Oxford University Press and Ohio State University Press, as well as special issues to be published in the journals Transnational Legal Theory and Social & Legal Studies. The grantees hope to turn the Protest Workshop into a forum for transnational activist scholarship, particularly from the Global South. This would include the publication of a bi-annual journal, Menace: Journal of Protest Studies.