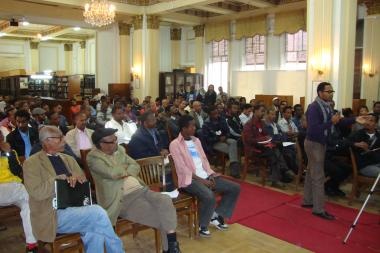 BIARI alumni funding was granted to support the third session of the Speaker Series, “Conversation on Humanities,” organized by two 2010 Critical Global Humanities alumni at Addis Ababa University (AAU), Ethiopia. The series was inspired by the work that emerged from CGH 2010, which was attended by two of the Speaker Series’ leaders, Binyam Sisay and Semeneh Ayalew. The goals of the series include the following: first, to help inform the teaching and research direction of the relatively new Faculty of Humanities at AAU; second, to help foster a scholarly exchange about the humanities between Ethiopia, the rest of Africa, the Global South, and the West; and third, to connect the alleviation of poverty in Ethiopia to an understanding of the psyche, culture, and philosophy of Ethiopian society. The series sought to expand upon many of the themes discussed in the CGH institute of BIARI 2010 and 2011, including incorporating performance, music, and orality as a body of knowledge. Furthermore, the series afforded the opportunity for alumni and conveners of the 2010 CGH institutes to further collaborate and present new research.

The first session of the series, which took place on November 4, 2010, hosted three prominent local scholars to discuss the state of humanities in Ethiopian perspectives.  The second session, on January 14, 2011, brought former CGH conveners, Professor Anthony Bogues and Professor Geri Augusto, to AAU to present on the study of humanities from a critical global perspective. The third session on May 13, 2011, which was funded by BIARI, focused on South Asian and Latin American perspectives, and brought three BIARI 2010 alumni as presenters. Professor Sunalini Kumar of Delhi University, India, gave a talk discussing the state and the crisis of humanism in the contemporary world. Professor Rachmi Diyah Larasati of the University of Minnesota discussed the female body and dance as a historical archive. Finally, Professor Jose-Manuel Barreto of Birbeck College, London University argued that the humanities and human rights can be seen from a non-Eurocentric perspective through the discussion of a Latin American case study. Each of the BIARI speakers also gave workshops for a smaller number of graduate students and faculty members.  A proceeding was published from the sessions, and summaries of the lecture series were translated into Amharic and aired on Ethiopian radio. The conveners of the series hope to hold the fourth session in July 2012.