The Rivonia Trial 50 Years On 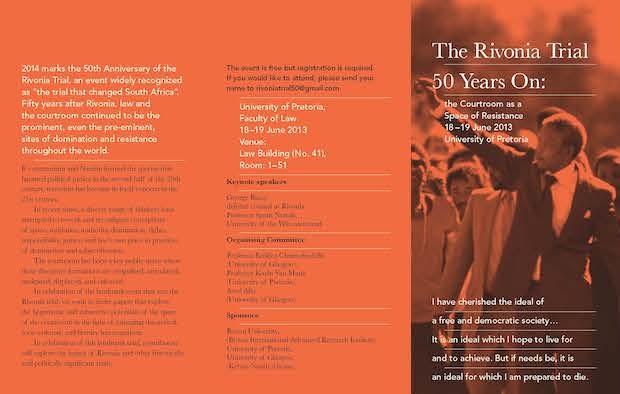 At the Theater and Civil Society Institute in 2012, a number of participants discovered and further explored common interests in the politics of oppression and resistance in spaces of performance. The courtroom came up as one such space. Together with colleagues from India and Chile, and in collaboration with the Glasgow Legal Theory Group, BIARI alumnus Awol Allo set out to bring together critical legal theory with performance studies in a re-examination of Apartheid South Africa's Rivonia Trial of 1963-64. At the trial, a number of African National Congress (ANC) leaders, including Nelson Mandela, faced charges of conspiracy and of preparing to use violence for political ends. During the trial, Mandela delivered an important statement of his political principles: he was jailed for 27 years.  At the project conference at Glasgow in June 2013, invited scholars undertook a re-examination of Mandela's strategy of using the dock to challenge Apartheid within its very citadel. An edited volume, The Courtroom as a Space of Resistance: Reflections on the Legacy of the Rivonia Trial was published in 2015.

Edited Volume: The Courtroom as a Space of Resistance