Embedded! Archaeologists and Anthropologists in Modern Landscapes of Conflict 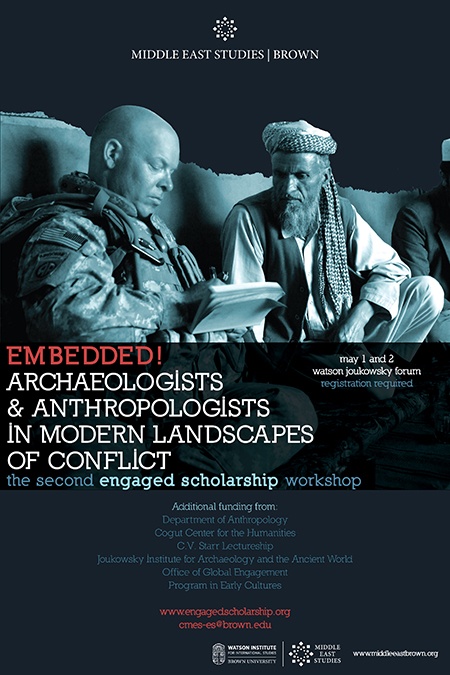 This workshop is the second leg of the annual Engaged Scholarship Workshops organized by Brown University’s Middle East Studies, under the broader initiative entitled “Knowledge Production, Ethics, Solidarity: Stories from the field.” These two-day workshops take place in the spring of every academic year. The format of the gatherings is explicitly geared towards offering an open platform of critical discussion for controversial topics that emerge from the intersection of academic fieldwork, ethics, social movements and activism. The  Second Engaged Scholarship Workshop  will be concerned with the contemporary archaeological and anthropological field practices in contexts of war and social conflict and their ethical implications.

In recent decades, both archaeologists and anthropologists who work in the precarious war zones in the Middle East have been increasingly drawn into collaborations with western and local military forces via initiatives such as the so called  Human Terrain Systems, adopting military technologies for accessing data about otherwise inaccessible places, and accepting funding from the military for field research. These developments intersect with a cultural/social scientific turn in the U.S. military. Likewise, in recent years, several new archaeological projects have been initiated by western archaeological teams in war-torn countries such as Iraq, Afghanistan and Palestine. Concerns of western institutions for the loss of cultural heritage are often canalized into initiatives to rescue heritage, supported by narratives of global ownership. The methodological, ethical, political, cultural, and practical implications of these new initiatives and collaborations however have been rarely discussed in academic contexts, even though their problematic aspects have been pointed out persistently by several anthropologists and archaeologists, for example through the Network of Concerned Anthropologists. This workshop will provide a platform for an open and critical discussion of the ethical implications of archaeological and anthropological fieldwork in conflict zones in the Middle East, collaborations with the military and what it means to be embedded in the military complex in both the contemporary and the historical contexts.