Missing Links: Islamic Civilization and the Formation of the Modern West 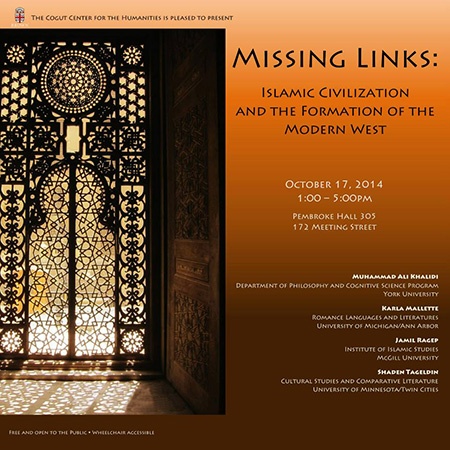 There is now a critical mass of innovative scholars in the US, Europe, and the Arab world who argue that the formation of the Modern West was influenced by Islamic civilization. The field has grown quantitatively and qualitatively, with new lines of inquiry pushing in several new directions simultaneously. This colloquium brings together scholars in an informal setting to take stock of research trends, identify promising new questions and sources, exchange experiences and insights, and set the stage for more symposiums and conferences on the topic.

Some questions addressed by the speakers: What were the influences on the modern west of Islamic civilization?  Why has mainstream scholarship been slow and/or resistant to embrace research on these Islamic influences as a core part of the history of philosophy, social theory and science in the modern world? What could and should be done to develop this area of research and to extend its broader academic and public influence and impact?