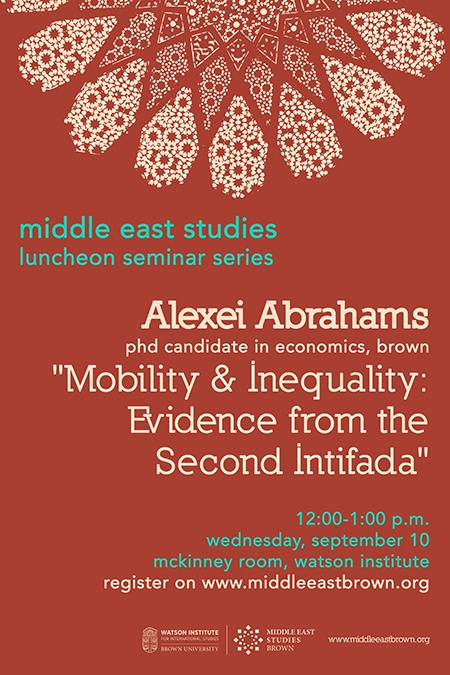 Registration is now open. You can register below.

This paper finds that mobility disruption of a commuter economy tends to exacerbate preexisting spatial economic inequalities. I study the Palestinian West Bank, 1997-2007, a small inland territory possessing a highly active commuter economy where laborers travel regularly between their hometowns and places of work. Starting in 2002, amidst a violent uprising, the Israeli army deployed numerous security obstacles (checkpoints, roadblocks, walls) along the West Bank's internal road network, disrupting commuter traffic. I provide strong empirical evidence to complement a well known claim that obstacle placement was motivated by a desire to intercept and deter Palestinian traffic in the vicinity of Israeli civilian settlements. As such, the placement of obstacles generated "quasirandom" increases to transit costs between Palestinian towns. Among towns whose commuter flow was obstructed, economic consequences varied: towns with low initial employment rates suffered significant employment losses, while those with high initial employment rates sometimes enjoyed employment increases. There is some evidence that net-immigration rates and satellite nighttime light emissions responded similarly. I interpret these results with a core-periphery commuting model, where most jobs are offered in a handful of large, 'core' cities (such as Ramallah, Nablus, Hebron). Peripheral villages are dependent on the core for work opportunities. Increases to transit costs make commuting less feasible, causing peripheral laborers to give up their jobs in the core. These job vacancies are seized upon by core-dwelling laborers, thus raising employment rates in the core, while also inducing immigration from the periphery to the core. Increased transit costs therefore exacerbate economic inequality between the core and periphery. Relevant to Palestinian nation building, if these transit costs persist then the long-term impoverishment of peripheral areas will tend to induce periphery-to-core migration, crowding core cities while leaving peripheral villages vulnerable to annexation.

Alexei Abrahams is a PhD candidate at Brown University's Department of Economics under Nathaniel Baum-Snow, Andrew Foster and David Weil. Focusing in urban and development economics, he has a regional interest in the Middle East. He has spent significant time living in Jordan and the West Bank, studying Arabic and working with census data at the Palestinian Central Bureau of Statistics in Ramallah. In 2012, as a guest scholar at Bir Zeit University, he began researching the consequences of spatial disruptions of the West Bank economy during the 2nd Intifada era. He was supported by a NIH T-32 grant as a Brown PSTC fellow (2011-2013) and as a Watson Fellow (2013). During this time he also initiated research on urban renewal and intra-neighborhood ethnic violence in the Old City of Hebron, in cooperation with the Hebron Municipality. Alexei's research combines geocoded survey data with satellite imagery to study spatial economic problems in the developing world. While completing his dissertation, Alexei continues to work as a consultant to the World Bank's urban anchor, joining a team of economic researchers studying the spatial economic efficiency of major African cities. He is also the lead author of a research paper devising a technical correction to measurement error in satellite nighttime lights imagery. Alexei presented his dissertation research at the PAA Conference (May, 2014) and will present soon at NARSC (November, 2014). Alexei holds an MA in Economics from Brown and BS degrees in Mathematics and Economics from Syracuse University.