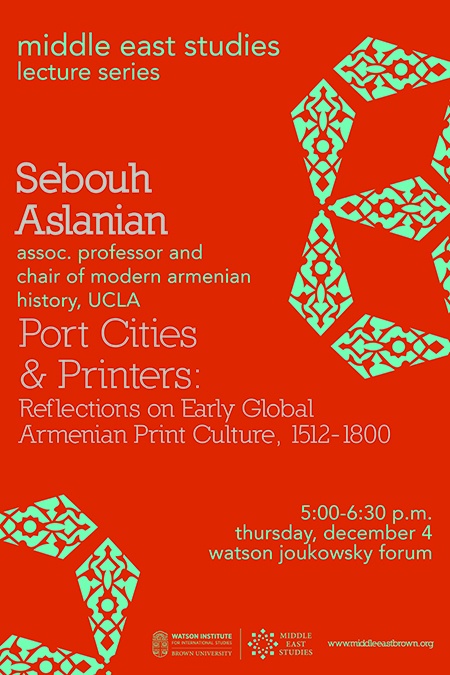 This event is part of the Middle East Studies lecture series.

From its origins in Venice in 1512, the history of early modern (1500-1800) Armenian print culture was closely entangled with that of port cities, initially in Europe and subsequently in Asia. In fact, virtually every Armenian printing press before 1800 was established either in or close to port cities, and the few that were not, owed their existence to on-going relations with port locations. Yet, despite the obvious relationship between ports and printers, their synergetic relationship has thus far largely eluded scholarly attention. Professor Aslanian’s lecture explores the intimate relationship between port cities and the rich history of Armenian print culture during the early modern period. The talk will draw from Aslanian’s next book project that is dedicated to exploring the first three hundred years of Armenian printing history in Europe and the Indian Ocean.

Sebouh D. Aslanian received his Ph.D. (with distinction) from Columbia University in 2007 and is Associate Professor of History and the first holder of the Richard Hovannisian Endowed Chair of Modern Armenian History at the University of California, Los Angeles. Aslanian specializes in early modern world and Armenian history and is the author of From the Indian Ocean to the Mediterranean: The Global Trade Networks of Armenian Merchants from New Julfa, Isfahan (Berkeley: University of California Press, 2011).