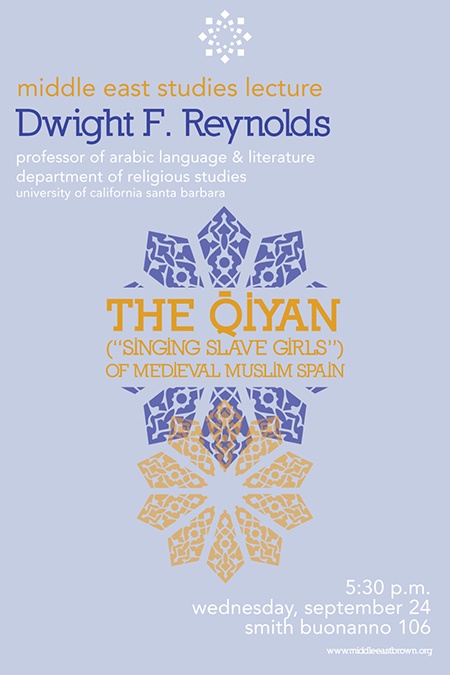 To watch a webcast of Professor Reynolds talk, click here.    (Talk starts at 4:28)

Abstract:
From the 8th to the 13th centuries, female slaves trained in musical composition and performance, the recitation and composition of poetry, the art of embellishing their conversation with entertaining literary and historical anecdotes, the crafts of calligraphy and shadow-puppetry, as well as other art forms, were one of the most elegant and refined expressions of Islamic culture in Spain. These women (Ar. qiyÄn) were major contributors to, and conduits for, the transmission of the arts during the golden age of Islamic Spain (Ar. al-Andalus). In this presentation, Professor Dwight Reynolds explores the conditions in which these fabulously expensive slaves lived their lives, were trained and marketed, practiced and performed their crafts, and at times managed to exert a certain amount of control over their own fates.

This talk is part of his current book project (The Musical Heritage of al-Andalus), which traces Arabo-Andalusian music from its medieval origins to its modern forms in Morocco, Algeria, Tunisia, Libya, Egypt, Israel, Palestine, Lebanon, Syria and Yemen. The Andalusian musical tradition, having been performed without interruption for nearly a thousand years, is one of the world’s great art music traditions. Remarkably, from the Middle Ages to the present, the tradition has been one that has been shared by Jewish and Muslim communities in many regions of the Middle East. 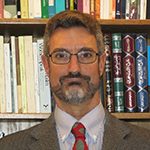 Dwight F. Reynolds is professor of Arabic language and literature in the Department of Religious Studies at the University of California, Santa Barbara. He is the author of Heroic Poets, Poetic Heroes: The Ethnography of Performance in an Arabic Oral Epic Tradition (1995) and Arab Folklore: A Handbook (2007); co-author and editor of Interpreting the Self: Autobiography in the Arabic Literary Tradition (2001) and The Cambridge Companion to Modern Arab Culture (April 2015); as well as co-editor of The Garland Encyclopedia of World Music, Volume 6: The Middle East (2002) and section editor of The Cambridge History of Arabic Literature: the Post-Classical Period (2006). He has conducted ethnographic research on performance traditions in North Africa, Egypt, and the Levant.