Turkey at the Tipping Point with Jenny White 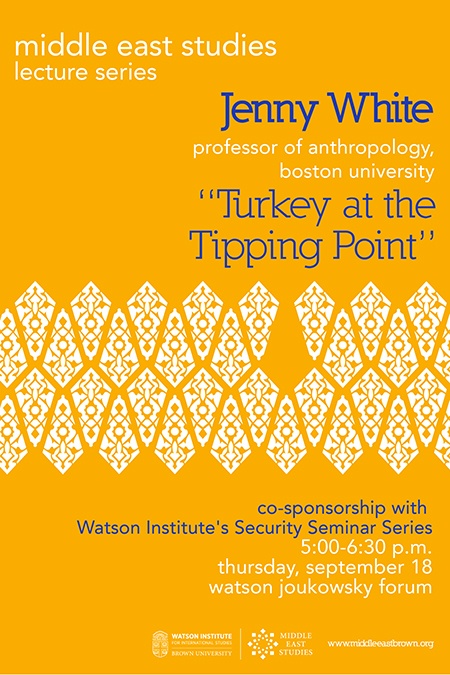 The Choices Program conducted an interview with Jenny White as part of the Scholars Online collection for "Empire, Republic, Democracy: A History of Turkey". Click here to hear Jenny White speak about the role of religion in government and society, and different veiling practices.

Jenny White will discuss the process by which Turkey’s national identity has been transformed over the past two decades, the subject of her latest book Muslim Nationalism and the New Turks. Turkey’s Muslim elites have mounted a powerful political and economic challenge to the country’s secularists, developing an alternative definition of the nation based on a nostalgic revival of Turkey’s Ottoman past. During this process, the meaning of Islam has undergone a radical redefinition as Islamist ideology was edged out by a personal Muslimhood. However, a generation of middle-class, globalized youth has emerged, most visibly in the 2013 Gezi protests, that rejects even this definition of the nation and that crosses secular/Islamic lines. The response has been increasing authoritarianism and nationalist revival. Turkish democracy is at a tipping point. Muslim Nationalism and the New Turks was chosen by Foreign Affairs as one of three "Best Books of 2012 on the Middle East."

Jenny White is a writer and social anthropologist and Professor at Boston University. She is the former president of the Turkish Studies Association and of the American Anthropological Association Middle East Section, and sits on the board of the Institute of Turkish Studies in Washington, DC. She has received numerous grants and fellowships from, among others, the Social Science Research Council, the MacArthur Foundation, the National Science Foundation, and Fulbright-Hays. She is author of Muslim Nationalism and the New Turks (chosen by Foreign Policy as one of three best books on the Middle East in 2012); Islamist Mobilization in Turkey: A Study in Vernacular Politics (Winner of the 2003 Douglass Prize for best book in Europeanist anthropology); and Money Makes Us Relatives: Women’s Labor in Urban Turkey. She has authored numerous articles on Turkey and on Turks in Germany and lectures internationally on topics ranging from political Islam and nationalism to ethnic identity and gender issues. Professor White has been following events in Turkey since the mid-1970s. Her books have been translated into Turkish. She writes a syndicated blog on contemporary Turkey that Foreign Policy named as one of two blogs on Turkey that President Obama should read: http://kamilpasha.com/