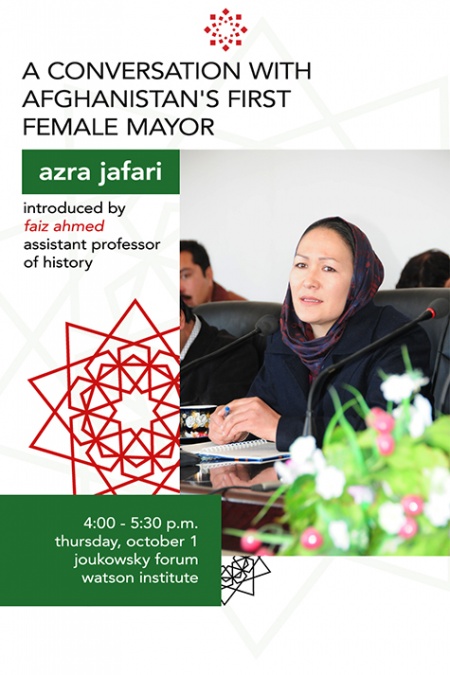 Azra Jafari was born in 1978 in Ghor Province, Afghanistan. During the Soviet occupation, Jafari’s family took refuge in Iran where Jafari served as Editor-in-Chief of the Afghan social and cultural magazine Farhang, and established an elementary and middle school for the children of Afghan refugees.

Jafari returned to Afghanistan following the removal of the Taliban. In late 2001, she participated in the Emergency Loya Jirga that formed the new Afghan government. She worked as Deputy Manager of the Equal Rights Association, and for the Secretariat of the Commission for the Constitution of Afghanistan. She also earned a degree in Midwifery in 2006.

In 2008 Afghan President Hamid Karzai appointed Jafari as the nation’s first female mayor. She served nearly six years as Mayor of Nili Municipality in Afghanistan, and remains the only female ever appointed as an Afghan mayor. Jafari authored the 2008 book, I Am A Working Woman, which examines employment laws and the rights of Afghan women in the labor market. She was also the sole female co-author of the new Constitution of Afghanistan in 2003.

Jafari’s deep commitment to social development and peace-building was recognized in 2013 by the international N-PEACE Network Association, which selected her as a candidate for its Role Model For Peace Award for Asian nations. In 2011 Jafari received the Meeto Memorial Award for her commitment to peace, justice, socioeconomic development, and human rights.