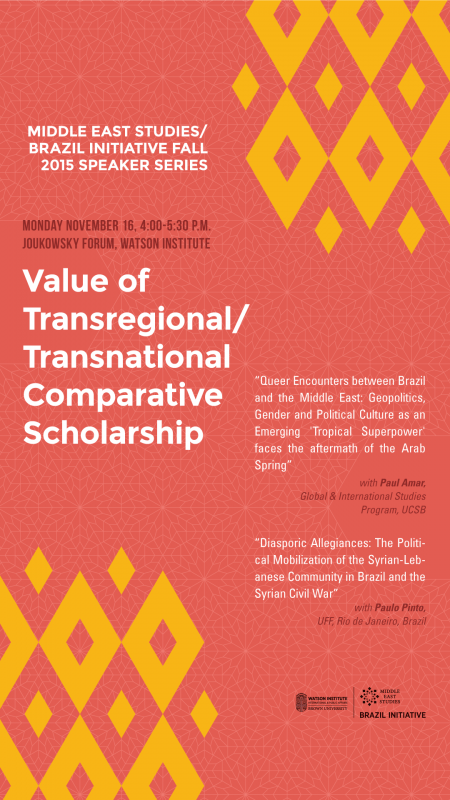 This inaugural speaker series explores the “south-south” historical and contemporary linkages, impacts, and influences of these two regions upon one another .

In the first of the series on November 16,  Paul Amar, Associate Professor, Global & International Studies Program, University of California, SantaBarbara, and Paulo Pinto, Director of the Center for Middle East Studies at the Fluminense Federal University, Niteroi, Brazil, will be speaking on the “Value of Transregional / Transnational Comparative Scholarship.”

Why does work  that  crosses between the Middle East and Latin America (specifically  Brazil)  raise questions and develop methods that are uniquely productive and  illuminating? Amar and Pinto  will focus on how they  began to develop this network  in Rio  in 2003 and how it has developed, as well as speaking  to their  specific  fields of anthropology, political science and global studies.

Paul Amar:
“Queer Encounters between Brazil and the Middle East: Geopolitics, Gender and Political Culture as an Emerging ‘Tropical Superpower’ faces the aftermath of the Arab Spring.”

Paul Amar’s talk will identify recent shifts in transregional geopolitical relations between Brazil and the Middle East. He will argue that transnational political-economic, institutional and discursive changes have articulated a new imaginary of “global south ascendance” and racial (or racialized) solidarity between the Arab World and South America. He will discuss histories of Arab migration to Brazil as well as West African Muslim slave importation that have informed these relations and imaginaries. And he will analyze recent attempts, in the era of President Lula (2003-2011), to revive doctrines of Third Worldism and Global South Solidarity specifically by reaching out to the Middle East. Amar argues that Brazil-specific doctrines of Tropicalism and Racial Democracy persist in constituting new forms of Orientalism and trans-Atlantic formations of the “New Moor” that haunt this new generation of world alliances. Conveying recent findings from the era of the “Arab Spring” (2010-2013) in the Middle East and the current troubled presidency of Dilma Rousseff in Brazil, Prof. Amar will point to the value of transnational and comparative scholarship for deciphering large-scale shifts in identity formation and policymaking.

BIO:
Paul Amar, Associate Professor in the Global Studies Department at the University of California Santa Barbara, is a political scientist and anthropologist with affiliate appointments in Feminist Studies, Sociology, Comparative Literature, Middle East Studies, and Latin American & Iberian Studies. He currently serves as Director of the MA and PhD Programs in Global Studies, Chair of the Program in Middle East Studies, and Coordinator of the Global Security Studies Hub. Before he began his academic career, he worked as a journalist in Cairo, a police reformer and sexuality rights activist in Rio de Janeiro, and as a conflict-resolution and economic development specialist at the United Nations. His books include: Cairo Cosmopolitan (2006); New Racial Missions of Policing (2010); Global South to the Rescue (2011); Dispatches from the Arab Spring (2013); The Middle East and Brazil (2014), and The Security Archipelago: Human-Security States, Sexuality Politics and the End of Neoliberalism (2014).

His book, “The Security Archipelago” was awarded the Charles Taylor Award for “Best Book of the Year” in 2014 by the Interpretive Methods Section of the American Political Science Association.

Paulo Pinto:
“Diasporic Allegiances, the Political Mobilization of the Syrian-Lebanese Community in Brazil and the Syrian Civil War.”

Pinto will speak on the Syrian-Lebanese presence in Brazil, created by several waves of immigration, which started in the late nineteenth century and continued, albeit in much reduced numbers, until today. The Syrian immigrants and their descendants usually tried to connect their identities to larger Arab nationalistic frameworks, creating and affiliating themselves to Syrian-Lebanese and/or Arab institutions, rather than simply Syrian ones. However, the ongoing civil war in Syria has triggered an unprecedented political mobilization of this population, including the generations born and raised in Brazil, around specific Syrian issues. While one would expect that communities who experienced a transition to democracy thirty years ago would support the Syrian uprising, most of Syrian diasporic organizations in Brazil and Argentina have shown an unconditional support to the Ba‘thist regime. Based on ethnographic fieldwork on religious and ethnic associations, interviews with diaspora leaders and organizations’ members, as well as on the organizations’ material and history, our paper aims to understand the political positioning of the Syria-Lebanese immigrants and their descendants in Brazil, as well as to unveil how Bashar el Assad’s government has tried to capitalize this support as some sort of transnational political capital in order to strengthen his position both inside Syria and in the international arena.

BIO:
Paulo G. Pinto has a Ph.D. in Anthropology from Boston University. He is professor of Anthropology at the Universidade Federal Fluminense, Brazil, where he is also director of the Center for Middle East Studies. He did ethnographic fieldwork in Syria in various periods from 1999 to 2010. He also has done fieldwork with the Muslim communities in Brazil since 2003. In 2012-2013 he did ethnographic fieldwork of the ziyāra al-arba‘iyyn in Najaf and Karbala, Iraq. He is author of articles and books on Sufism and other forms of Islam in contemporary Syria, as well as on Arab ethnicity and Muslim communities in Brazil. His recent publications include Ethnographies of Islam: Ritual Performances and Everyday Practices. Edinburgh: Edinburgh University Press, 2013, which he co-edited with Baudoin Dupret, Thomas Pierret and Kathryn Spelman-Poots; andCrescent Over Another Horizon: Islam in Latin America, the Caribbean and Latino USA. Austin: University of Texas Press, 2015, which he co-edited with John Karam and Maria del Mar Logroño Narbona.

The second event will take place on Thursday, December 3, at 2:00 p.m.