Workshop on “The Politics of Human Shielding” 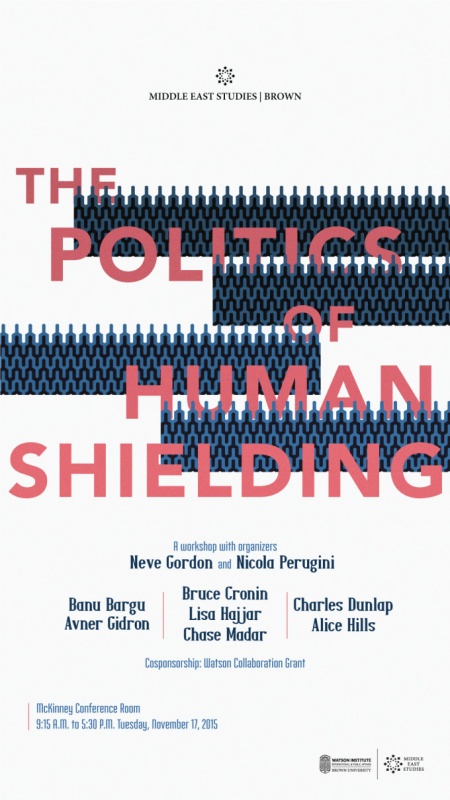 In this workshop Scholars and human rights experts will discuss the role of human shielding in warfare and to analyze the way international humanitarian law (IHL) treats this increasingly significant phenomenon. Human shielding involves the use of persons protected by IHL, such as prisoners of war or civilians, to deter attacks on combatants or military sites. Placing civilians on train tracks, in airports or in any site that is considered to be a legitimate military target of the enemy army in order to prevent the latter from striking is illegal according to IHL. Along similar lines, carrying out military operations from within civilian spaces, particularly schools, hospitals, religious sites, civilian neighborhoods and even industrial areas is considered illegal. Article 28 of the Fourth Geneva Convention states that, “The presence of a protected person may not be used to render certain points or areas immune from military operations.”

The 1977 Additional Protocol I to the Convention elaborates on the prohibitions of using human shields, while the 1998 Rome Statute of the International Criminal Court characterized human shielding as a war crime.

Considering that urban settings are rapidly becoming the most prominent arenas of contemporary warfare, the significance of the human shield clauses in international law cannot be overstated. Urban areas, as Stephen Graham put it, “have become the lightning conductors for our planet’s political violence,” while “warfare strongly shapes quotidian urban life.” The permeation of organized, political violence within and through cities renders human shielding a ubiquitous phenomenon, since practically all fighting within a city involves human shields in some form or another. In other words, urban warfare inevitably produces an overlapping between the noncombatant and combatant and between civilian and military architectural edifices and artifacts. But since the non-combatant and the civilian are protected according to IHL this overlapping creates a problem for liberal regimes, which insist on the legality of their actions in order to underscore the ethics of the violence they deploy.

Bringing together human rights experts (both from academia and leading NGOs), legal scholars, political scientists, historians and anthropologists this two-day workshop aims to discuss, debate and analyze three central issues. First, we intend to examine the legal history of human shielding, when it was first introduced into international law, what spurred its introduction, and how the legal concept has developed over the years. Second, the workshop aims to examine different conflicts—Iraq, ex-Yugoslavia, as well as Israel and Palestine—in order to assess and analyze similarities and differences both in the way human shields were used and the discursive response to their deployment. It is within this context that we will also discuss the difference between voluntary and involuntary human shields. Finally, we propose to connect the case studies to international law and ask whether the way international law treats human shielding is adequate given some of the changes in modern warfare.

The workshop on human shields and international law is not only pertinent to security and governance but also deals with an issue that, on the one hand, has been dealt with to a very limited extent both within academia and among human rights groups, and, on the other hand, the use of human shields is becoming more pervasive.

Cosponsored by the Watson Institute for International and Public Affairs.