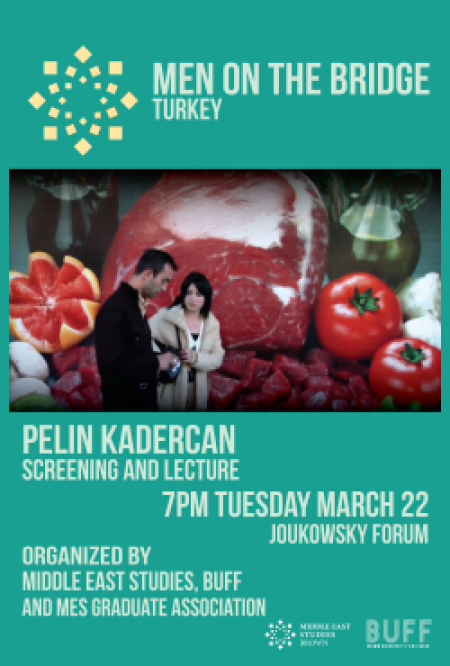 Turkish with English Subtitles. 1 hour 27 minutes, followed by a videorecorded interview with the director, and Q&A with Professor Kadercan.

Presented by Professor Pelin Kadercan. Organized by MESGSA and BUFF on behalf of Middle East Studies.

Men on the Bridge – This 2009 Turkish drama tells the story of the new generation of Turkish youth, who live in the suburbs of Istanbul and come to the city to make a living. The film follows a rose seller, a taxi driver, and a traffic police officer, whose lives unknowingly intersect every day on the Bosporus Bridge in Istanbul.

The film gives a realistic, honest portrait of life in Istanbul and the economic and social struggles of youth in Turkey today.

Aslı Özge is born in Istanbul. After graduating from Marmara University Film and TV Academy she directed short films and a documentary before making her feature film debut in 2009 with MEN ON THE BRIDGE, which is a Turkish-Dutch-German coproduction. The film made its premiere at Locarno and Toronto Film Festivals, won many awards including Best Film at Istanbul Film Festival. The film is shown more than 40 festivals world wide and released in several countries including UK; Germany, Benelux, France and USA (MOMA). She won Best Director Award at the Istanbul Film Festival with her Turkish-German- Dutch co-production LIFELONG (2013) following its world premiere at the Berlin Film Festival. It is also released in numerous territories. Her latest film, a German-Dutch-French co-production, AUF EINMAL (All Of A Sudden) made its world premiere at 66.Berlin Film Festival Panorama Special 2016 and is awarded with the Special Mention of Europa Cinemas Label.

Pelin Kadercan, a historian born and raised in Istanbul, earned her Ph.D. in History from the University of Rochester. She is a visiting assistant professor of history at Brown University. Her major areas of interest lie in modern European and Middle Eastern history in a global context focusing on modern Germany and Turkey, Jewish studies and international human rights.