Luncheon Seminar | The Zionist left: Settler colonial practices and the representation of the Palestinian Nakba in Northern Palestine 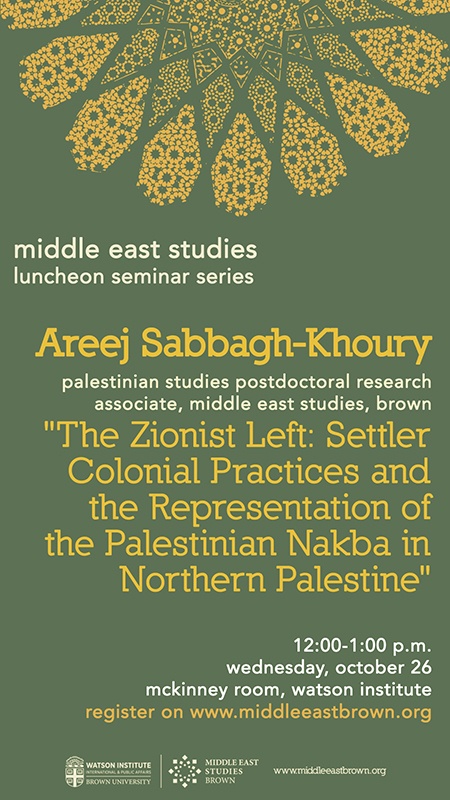 This event has reached capacity. McKinney Conference Room holds only 35 guests. Lunches for registered guests will be held until 12:00 noon, then released for those on standby.

Mining the national archives, the post Zionist historian in Israel focused on debunking the Zionist myths while most prominently focusing on the question if there was a master plan to displace Palestinians. Doing so, this kind of questions and similar others, that shed light on the practices of the Zionist establishment and forces distracted the research from inquiring the responsibility of the Zionist settlers and Israeli society on the displacement of refugees and not less important from controlling the Palestinian lands and property and banning the return of Palestinian refugees. Based on a meticulous examination of local Zionist archives of Ha-Shomer Ha-Tza’ir Kibbutzim in Marj Ibn `Amer, I will track some of the discussions that accompanied the process of expulsion of 1948 and the pillaging of the Palestinian property from neighboring Palestinian villages. Furthermore, I will explore how the politics of remembering by members of Ha-Shomer Ha-Tzair kibbutzim reconstructed memories of the colonization practices that preceded 1948 Nakba and their role in the Nakba.

Areej Sabbagh-Khoury is the Inaugural Post-doctoral Research Studies Associate in Palestine and Palestinian Studies at Brown University 2016-2017. She is also an associate researcher at Mada al-Carmel – The Arab Center for Applied Social Research. Her current book project examines relations between members of leftist Zionists kibbutzim and Palestinian villagers in Northern Palestine within a settler colonial framework. Sabbagh-Khoury completed her Ph.D. in the Department of Sociology and Anthropology at Tel Aviv University. She contributed to several book chapters and articles on citizenship, memory, gender and settler colonialism, among them “Palestinian Predicaments: Jewish Immigration and Refugees Repatriation.” She also co-edited two volumes of The Palestinians in Israel: A Guide to History, Politics, and Society: the first volume was published in 2011 and the second on December 2015 (both volumes were published in English, Hebrew and Arabic). She has received several awards and grants for her research, among them the PARC fellowship; the Fulbright Post-doctoral Scholar Award year 2015-2016; the 2015 Ibrahim Abu-Lughod Post-Doctoral Fellow at the Columbia University.