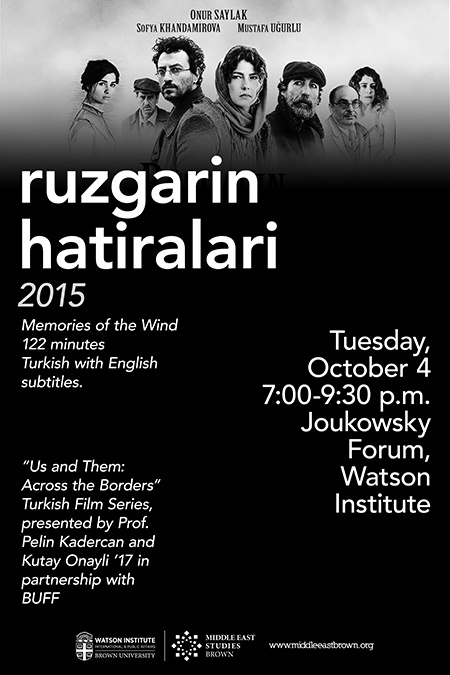 “Us and Them: Across the Borders” MES Turkish film series on Displacement, presented by Prof. Pelin Kadercan and Kutay Onayli ’17 in partnership with BUFF (Brown Film Forum)

Displacement has a broad meaning that involves many actors, many places, many classes, many genders and it is almost always associated with the trauma of the displaced.

This movie addresses the issues of ethnicity and belonging and conveys how it feels to be across the borders, not only in terms of dislocating out of the borders of a country but also in terms of struggling to exist at the margins of a society.

Description: Set during World War II, the film follows Aram, an Armenian painter and poet suspected of being a communist sympathizer, has to flee Istanbul during the latter half of the Second World War in the face of possible danger to his life.

Placed by his friends in a remote mountain house in the forest across the Soviet-Georgia border, where a young man and his wife give him shelter, Aram is supposed to wait for the arrival of the necessary papers that will authorize his trip across country lines.

As Aram waits for the papers that will take him across the border, he becomes more and more agitated with life in the woods. Through flashbacks, he remembers a painful past that claimed the lives of close ones during the Armenian relocation and genocide of 1915. The political drama soon turns into the tale of forbidden love as Aram and the wife, Meryem (Sofya Khandemirova), get closer.

Andreas Sinanos’s award-winning photography, captures the nature in its most naked state.