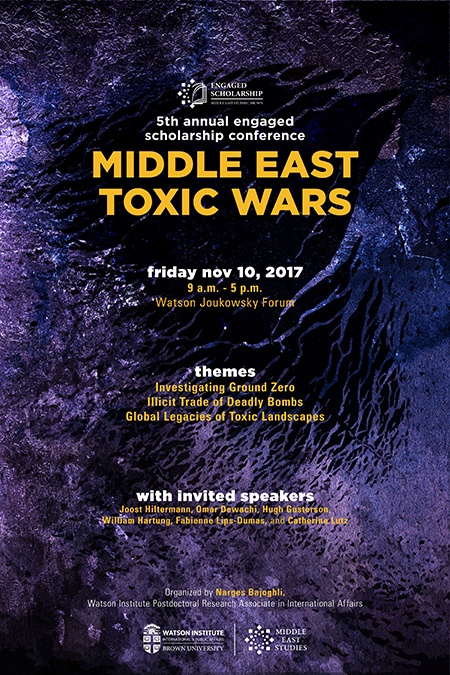 The Middle East has been ground zero for the major chemical attacks of the past 40 years. From the Iran-Iraq War (1980-88), to the Persian Gulf War (1991), to the Syrian Civil War (2011-present), countless civilians and soldiers have been exposed to chemical agents and hundreds of thousands of survivors live with the long-term consequences of these bombs. Yet, there has been limited scholarly and public work about chemical warfare and the traces it leaves behind in the region: from its illicit international trade, to the lives of survivors post-exposure, to the environmental disasters these bombs unleash.

Brown University’s Middle East Studies is hosting the fifth Engaged Scholarship Conference on November 10, 2017, entitled Middle East Toxic Wars. This conference will bring together scholars and filmmakers from around the world to discuss the three main themes of the conference:

Global Legacies of Toxic Landscapes: How scholars and filmmakers unearth the long-term environmental effects of chemical warfare and the ways they impact future generations. And, how scholars of the Middle East can learn from those who work to raise awareness and further scholarship about the deadly impact of toxins in other areas of the world.

Cosponsored by:
The Cogut Institute for the Humanities
The Department of Anthropology
The Humanitarian Innovation Initiative (HI2)