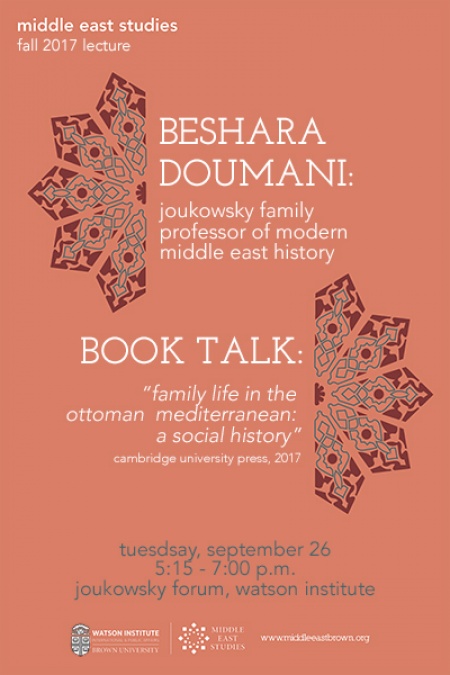 Registration on Eventbrite is required. Please click here to register.

Watch on Youtube
Podcast: Family, Sharia Law, and the Making of the Modern Middle East

Comments by David Sabean,* Henry J. Bruman Professor of German History at the University of California, Los Angeles, and a fellow of the American Academy of Arts and Sciences.

Cosponsored by the department of History

Abstract: In writings about Islam, women and modernity in the Middle East, family and religion are frequently invoked but rarely historicized. Based on a wide range of local sources spanning two centuries (1660-1860), Beshara Doumani argues that there is no such thing as a typical Muslim or Arab family type that is so central to Orientalist, nationalist, and Islamist political imaginations. Rather, one finds dramatic regional differences, even within the same cultural zone, in the ways that family was understood, organized, and reproduced. In his comparative examination of the property devolution strategies and gender regimes in the context of local political economies, Doumani offers a groundbreaking examination of the stories and priorities of ordinary people and how they shaped the making of the modern Middle East.

Beshara Doumani is a professor of history and director of Middle East Studies at Brown University. His research focuses on groups, places, and time periods marginalized by mainstream scholarship on the early modern and modern Middle East. He also writes on the topics of displacement, academic freedom, politics of knowledge production, and the Palestinian condition. His books include Family Life in the Ottoman Mediterranean: A Social History, Rediscovering Palestine: Merchants and Peasants in Jabal Nablus, 1700-1900, Academic Freedom After September 11 (editor), and Family History in the Middle East: Household, Property and Gender (editor). He is the editor of a book series, New Directions in Palestinian Studies, with the University of California Press.

Co-sponsored by the Department of History

David Warren Sabean is the Distinguished Professor of History & Henry J. Bruman Endowed Chair in German History
He studied cultural and intellectual history at the University of Wisconsin-Madison under George Mosse. He went off to Tübingen in 1995-6 to write a dissertation on the German Peasant War of 1525. After four years at the University of East Anglia, England, Sabean taught at the University of Pittsburgh, where he began to develop a large data base based on the records from a single South German village and spent a year as a post-doctoral student at Cambridge, studying social anthropology, with a concentration on kinship studies, with Jack Goody. From 1976 to 1983, Sabean joined a research group of social historians at the Max-Planck-Institut für Geschichte in Göttingen. During that period, he began to explore the territory of popular culture and wrote Power in the Blood: Popular Culture and Village Discourse in Early Modern Germany (Cambridge, 1984). Sabean returned to the United States in 1983 as a professor at UCLA, where he finished the first volume of his village study: Property, Production and Family in Neckarhausen, 1700-1870 (Cambridge, 1990). He spent another five years at Cornell before returning UCLA as the Bruman Professor. He published the second volume of his village study, Kinship in Neckarhausen, 1700-870 in 1998.  Sabean is now working on three projects: a study of narrativity in bureaucratic writing, collective research into the long-term history of kinship in Europe, and a comparative analysis of incest discourse in Europe since the sixteenth century.