Lecture | New Models of Patronage within Arts and Culture: Focus on the Gulf Cooperation Council 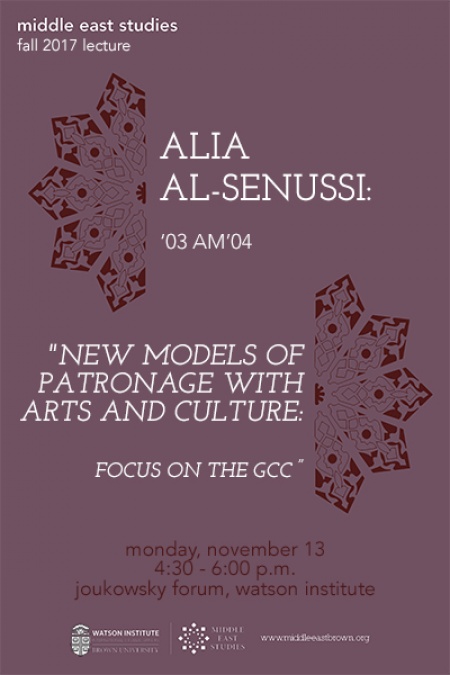 Abstract: The Kingdom of Saudi Arabia’s emergence on the contemporary art scene began with ground roots efforts by artists, art collectives and curators in Abha, far away from the traditional centers of commerce and politics.  However, in a short period of ten years these movements and actors have been subsumed into organizations run by the commercial and political elite and non-profit organizations under the patronage of senior members of the Al Saud family in Saudi Arabia and other ruling families throughout the GCC.  Artists however have continued to voice criticism and frustration with the current condition of civic society, yet do so with a keen understanding of what they believe they can and cannot say and also with a pronounced sense of patriotism imbued in their work ethic.  Artists often describe their feeling of self-censorship given their close personal and professional relationships with those in power, a phenomena not just in Saudi Arabia but across the GCC. The effects of cultural patronage on the activities and works of artists, non-profit art organization and artist collectives will be discussed through the examination of historical cultural patronage in absolute monarchies and family-run political systems.  A modern understanding of patronage in the GCC will be elucidated to accurately illustrate the tensions that exist between patron and artist and the power and influence held by the royal patron in an absolute monarchy. It will be examined how different agents can work together in the future, building sustainable models of cooperation. In particular, the importance of the role of culture in strengthening institutions of power and capacity building in society will be investigated.

The audience will be presented with a question regarding Western models and if they can be successfully applied in the Arab countries. Is it possible to use the medium of art to open up new avenues of collaboration outside the well-known and established government structures? What are the tasks ahead of Gulf Cooperation Council when it comes to culture? None of the above can be discussed without looking into the impact of creative industries. The subject has been studied in the UK and other Western countries and the impact greatly acknowledged. Culture boosts economy, creates jobs, encourages tourism, facilitates exchange, enables wellbeing, helps social engagement and develops communities, just to name a few of its contributions to general society. How can this knowledge be used to shape new models of patronage?

Alia is an active member of the contemporary art world, acclaimed for her work that has a special focus on young patronage and arts and culture in the Middle East, holding a variety of non-profit board and committee positions which promote young patronage of the arts in London and collecting in the Middle East.  The majority of the philanthropic work Alia does is through chairing/ founding/ running museum patrons groups as well as speaking engagements on the subject of new models of patronage and institution-building, for example at the Culture Summit 2017 held by Foreign Policy Group and TCA Abu Dhabi.

Alia is Chair of the Tate Young Patrons (and representative to the Tate Patrons board), and founding International Co-Chair of The Chinati Foundation Contemporaries Council as well as a member of the Committee for the Serpentine Gallery Future Contemporaries group (previously Vice Chair), was the founding co-chair of the Parasol Future Unit.

Alia is a founding member of the Tate’s Acquisitions Committee for the Middle East and North Africa, the Board of Patrons of Art Dubai (serving an integral role in the founding of the fair itself), the Board of 1:54 The African Art Fair, and the Middle East Circle of the Guggenheim.  Alia is a member of the board of trustees (the Council) of the Institute of Contemporary Arts London and has served previously as a Gala Co-Chair for 4 years. Alia is a member of the Strategic Advisory Panel of Delfina Foundation and the Advisory Board of Ikon Gallery, and the Advisory group of Photo London.

Alia also works at times as a curator and writer, such as in the recently published Mario Testino catalogue alongside the celebrated photographer’s show in Dubai or the critically acclaimed “Hong Kongese” show at Duddell’s, Hong Kong organized in conjunction with ICA London in March 2015.

Alia sits on the Board of Trustees for the Global Heritage Fund UK as well as previously their partner organization in the US.  Amongst Alia’s professional commitments, Alia works as the VIP Representative for the United Kingdom as well as the Middle East and North Africa and consultant for Art Basel.