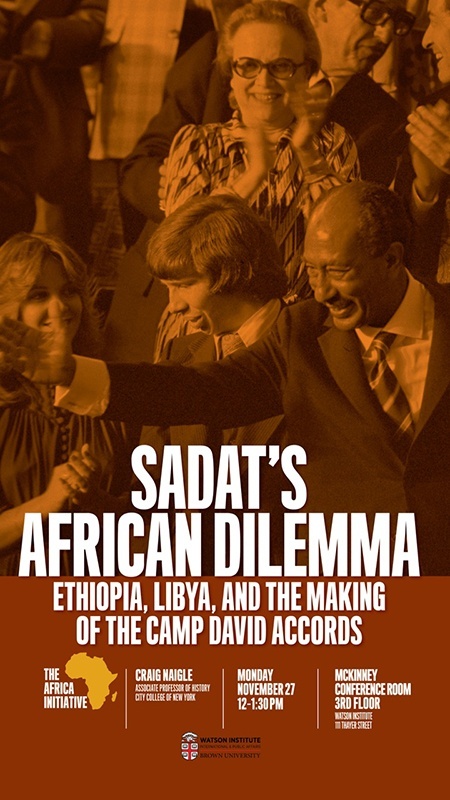 Craig Daigle is Associate Professor of History at the City College of New York.

Daigle will discuss a chapter of his latest book project, Camp David and the Remaking of the Middle East, which argues that the 1978 Camp David Accords, and subsequent Egyptian-Israeli peace treaty, were not simply an outgrowth of Arab-Israeli politics, but instead emerged out of a strategic realignment taking place from the Horn of Africa to Southwest Asia. Daigle’s talk will focus on how regional events in Africa, specifically the Ethiopian Revolution, Anwar Sadat’s growing feud with Libya’s Mu’ammar Qadhafi, and fear of regime change in Sudan, compelled Sadat to seek a peace agreement with Israel in 1978-1979.

Craig Daigle is Associate Professor of History at the City College of New York. His main interests are the global Cold War, U.S.-Middle East relations, and the Arab-Israeli Conflict. He is the author of The Limits of Détente: The United States, the Soviet Union, and the Arab-Israeli Conflict, 1969-1973 (Yale University Press, 2012), as well as other articles and essays that have appeared in Diplomatic History, the International Journal of Middle East Studies, and the Middle East Review of International Affairs. He is currently working on a book entitled Camp David and the Remaking of the Middle East, which explores the regional developments in the Middle East, Africa, and South Asia that led to the Camp David Accords and the new U.S.-led Persian Gulf security framework.