Luncheon Seminar | Captives, Slaves, and Refugees: Ransom and Resettlement of Jews in the Mediterranean World after 1648 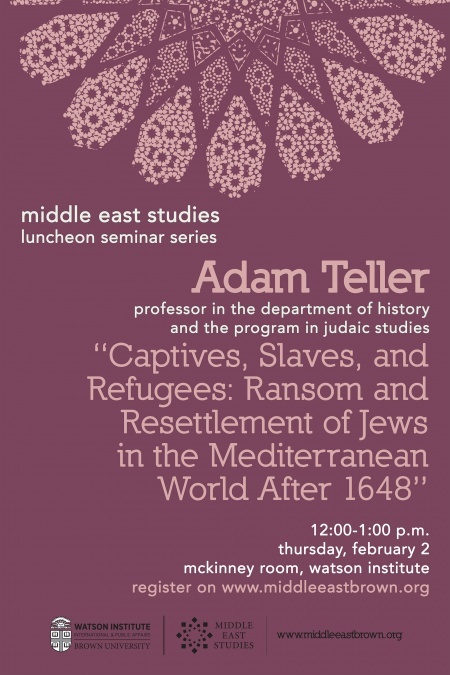 Registration on Eventbrite is required. We are now at capacity. Unclaimed seats and lunches will be released at 12:05 p.m. to those on standby on a first-come basis.

Adam Teller, Associate Professor in the Department of History and the Program in Judaic Studies

Captives, Slaves, and Refugees: Ransom and Resettlement of Jews in the Mediterranean World after 1648

Abstract: This paper examines the fate of the thousands of Jews from Ukraine captured by Crimean Tatar forces during the Khmelnytsky uprising of 1648.  It begins by examining the processes of displacement that swept them up in the Black Sea slave trade and brought them as captives first to the Crimean Khanate and then to the slave markets of Istanbul.  It next turns its focus to the trans-regional Jewish philanthropic networks based in Venice but reaching from Amsterdam to Fez and from Vilnius to Cairo, which raised money for their ransom and helped in their resettlement.  Though plagued by tensions, financial exploitation, and a chronic lack of funds, this ransoming and resettlement effort encouraged the development of a dense web of economic, social, and cultural interactions that crossed political borders and connected the regions of the eastern Mediterranean in ways hitherto unconsidered.

Adam Teller is a Professor in the Department of History and the Program in Judaic Studies.  He has written widely on the economic, social, and cultural history of the Jews in the Polish-Lithuanian Commonwealth.  His monographs: Living Together: The Jewish Quarter of Poznań in the Seventeenth Century, Jerusalem 2003 (written in Hebrew), and Money, Power, and Influence in Eighteenth Century Lithuania: The Jews on the Radziwiłł Estates, Stanford University Press 2016.  He received an NEH fellowship as Senior Scholar at the Center for Jewish History in New York in 2012/3 and was a member of the core academic team responsible for the award-winning POLIN Museum for the History of Polish Jews which opened in Warsaw in 2014.

This event is taking place in conjunction with the Mellon Sawyer "Displacement and the Making of the Modern World" series.