Luncheon Seminar | Israel/Palestine - the Exception, the Example, and the Rule 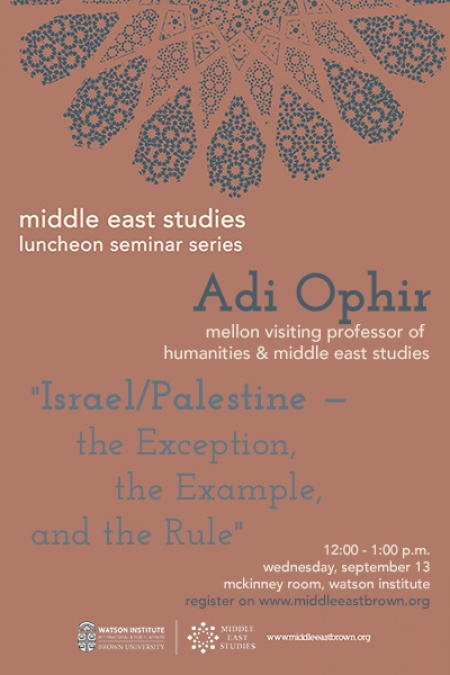 Registration is now at capacity and is closed. MES will hold space and lunches until 12:00 p.m. after which seminar seating and lunches will be opened up to those on stand-by.

Abstract: Palestine in general, and "the occupation" in particular have often been understood as a blatant exception to existing rules and historical patterns, but also as their paradigmatic example. Following a brief survey of some instances in which Palestine is presented as either an exception to the rule of its paradigmatic instantiation, I will argue that “the occupation” has become a synecdoche for Palestine, and as such serves critical scholars today as a show case in which the exemplary demonstration of the rule meets its paradigmatic exception. With this observation in mind I will question the unusual status of “the occupation” as a privileged site for critical studies and theory as well as academic and non-academic activism and ponder the reasons that have made “the occupation” a popular object of knowledge and a no less popular site of leftist activism.

Bio: Adi Ophir is professor emeritus at Tel Aviv University and a visiting professor at the Cogut Center for the Humanities and the program for Middle East Studies at Brown University. Among his recent works: The One State Condition (co-authored with Ariella Azoulay; Stanford University Press 2012), Divine Violence: Two Essays on God and Disaster (Hebrew 2013); Goy: Israel’s Multiple Others and the Birth of the Gentile, co-authored with Ishay Rosen-Zvi (Oxford University Press, forthcoming).